In 1926, the private school Académie de l’Assomption was established by the French-Canadian order of the Soeurs de l’Assomption de la Sainte-Vierge, originally from Nicolet in the province of Québec. The building still stands on 10763-98 Street and was built in 1913 originally as the Hotel Grand. In 1958, a large addition was added which fronted on 97 Street and 107 Avenue, but since then the addition has been removed. When the Sisters closed the Académie in 1972, it served for a time as Grant MacEwan Community College’s first campus, and afterwards as Kings’ College.

The Académie taught girls from the city and, as with the Collège des Jésuites and the Juniorat Saint-Jean, drew pupils from the greater rural population of the province and beyond. Many were from the upper classes, but children from less fortunate families were also accepted. It closed its doors in 1972.

Nearby was Immaculate Conception Parish, established in 1906, which eventually became the second Francophone parish of Edmonton; although, the clergy initially ministered to French, English, Polish, and German congregations. Located on 96street, which is also known as “Church Street,” this parish was amalgamated with that of St. Thomas d’Aquin in 2002 and the church now serves the Catholic Vietnamese community.

Two other Catholic educational institutions, for boys only, had been established earlier, and it was only through a public shaming of sorts that Archbishop H.J. O’Leary finally allowed the Sisters to establish a boarding school for girls, giving them the same opportunities as the boys. The Jesuit College founded in 1913, was finally obliged to close its doors in 1942 for financial reasons, and after its sale, the building was used by the Americans as headquarters for the construction of the Alaska Highway. It later became Charles Camsell Hospital, managed by Indian Affairs for native and Inuit patients. Demolished in 1967, it was replaced by a new building which now awaits restoration. The other Catholic School boarding school was that of the St. Francis of Assisi Friary/St. Anthony’s College built in 1925, to which a Gothic parapet and niche were added. Bishop Émile Legal invited the Franciscans come to Edmonton in 1909.  The friars were very much part of the Franco-Catholic community, but they were also noted for their multilingual skills. Their building at 6770-129 Avenue is now used by the John Bosco Child and Family Services Foundation. 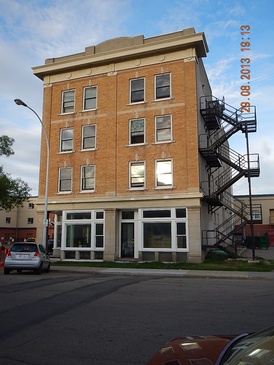