(now known as the Legislature Annex)

The AGT Building/Legislature Annex is reputed to be the first ‘curtain wall’ office building in Edmonton—basically a prototype curtain wall building. It followed closely on the development of high-rise curtain wall office buildings in other parts of North America, including the 1952 Lever House in New York that uses similar coloured spandrel panels.

The Early Modern style of this building is typified by the use of the square tower composition, horizontal emphasis in the expression of the floor levels, the use of green Aklo spandrel glass and integral screens for sun control. The windows did not open which was a result of the development of central air handling and air-conditioning. A central core carried all utilities. Construction started in 1951 and was completed in 1953, at which time it became the head office for Alberta Government Telephones. An addition in 1958 brought its height to 14 stories. 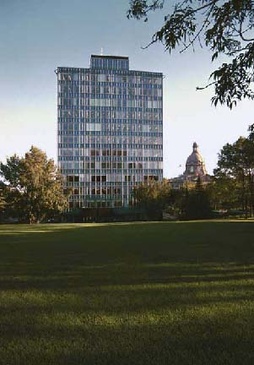 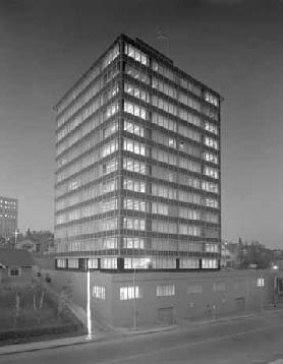