In the early 1900s, Ukrainian workers provided unskilled labour during construction of the Alberta legislature. A century later, Edward Stelmach, descended from that same generation of Ukrainian immigrants, became Alberta’s 13th premier. On the grounds, prominently located near the fountain, the sculpture The Commitment commemorates the centenary of Ukrainian immigration and settlement.

Ukrainian workers provided much of the unskilled and undocumented labour for the construction of early Edmonton’s infrastructure, ranging from streets and sewers to buildings like the Alberta legislature. Recorded Ukrainian interaction with the provincial seat of power dates from 1913 when Andrew Shandro, running for the Liberals in the rural Whitford constituency, became the first Ukrainian elected to the Alberta Legislative Assembly. In 2006 a farmer and the sitting member from the same area, Progressive Conservative Edward (Ed) Stelmach became the first premier of Ukrainian origin, sparking a cartoonist in the local press to replace the dome on the legislature building with a Ukrainian Easter egg. Stelmach resigned as premier in 2011; his official portrait, unveiled in the legislature building beside those of his predecessors in 2012, includes an Easter egg in the bottom left corner. When Ukrainian Canadians celebrated the centennial of their immigration and settlement in 1991, Ukrainians in Alberta debated where best to erect a commemorative statue for maximum public impact. One option would have been in the old bloc settlement east of Edmonton where the great majority of immigrants had homesteaded. The second option, ultimately chosen, was a much more accessible and politically symbolic location on the recently revamped grounds of the Alberta Legislature. The bronze statue, The Commitment, by Edmonton sculptor Danek Możdżeński, occupies a prominent spot near the central fountain. It features a young immigrant family flanked by an array of emotionally charged objects. On one side, representing Ukrainians’ old-world cultural heritage, are musical instruments, ritual breads, an Easter basket, a sheaf of wheat, an embroidered runner and dancing shoes. On the other side, representing the prairie immigrant and pioneer experience, are several trunks, a plough, sacks of grain and the hand tools needed for breaking and harvesting the land. 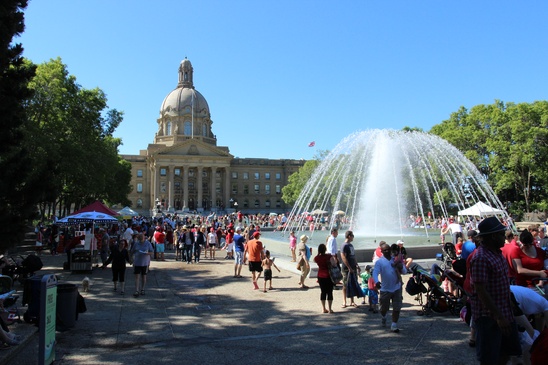 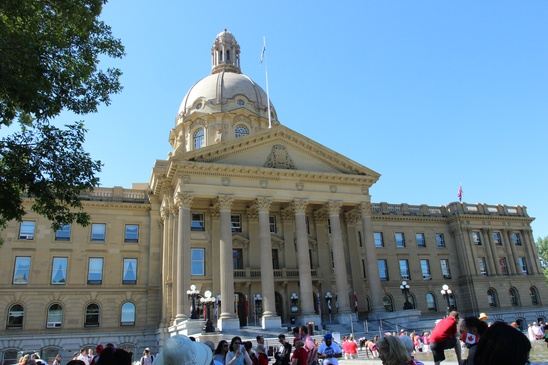