The Alberta Motor Association Building is distinguished by a huge hearth element placed directly at the entry of the building. It borrows elements from Frank Lloyd Wright’s Prairie Style as well as West Coast Regionalism. Other characteristics that betray its modern roots include broad overhanging canopies over the windows, an expressed and exposed wood structure, the modular treatment of the windows, and large expanses of glass in vertically-oriented wood frames. Features that root it in more of a country club aesthetic include the rustic multi-hued brick for the building base and feature walls, wide wood siding in strategic places, the wide brick hearth and a large landscaped lot. AMA staff moved into the building in mid-August 1957. The "horsehshoe-shaped travel counter" and "teletype network" connections were cited as innovations; teletype had only just been introduced by the AMA the previous year. A new west wing was opened in November 1962 with natural wood panels and pastel colours that “blend harmoniously with the existing building.” Mahogany paneling in the offices and sit-down bays at the travel counter also were designed into the building. Phone lines and a broadcasting booth providing radio stations with road reports were new additions to the teletype.

The 1957 AMA Office building was demolished in entirety and replaced by a new structure which opened in August 2009. 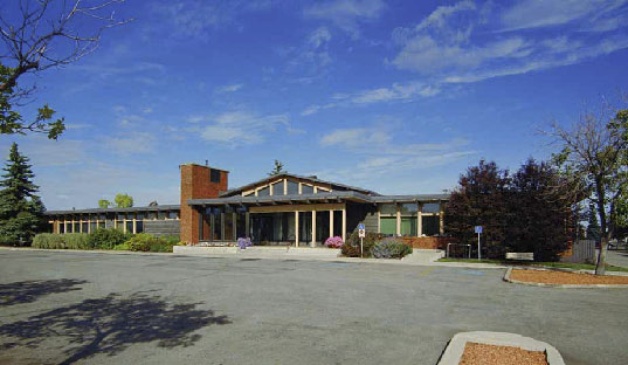