Alex Mair was a quiet giant who touched everyone he met with his warmth, humour and style. This remarkable individual, who had an uncanny way of lighting up a room with his manner and presence, was born in Edmonton in 1926 and lived here his entire life.

Mair attended the University of Alberta, graduating with a degree in civil engineering in 1948. Soon after he found work with the City of Edmonton's engineering department, but did not forget his interest in writing and began submitting articles to an assortment of magazines. Eventually the lure of writing drew him away from his engineering career.

He wrote articles for the CBC and later for Southam Business Publications.  Along with his continued work with CBC, Alex found time in 1967 to help organize and launch the Radio and Television Arts program at N.A.I.T. In 1978 he began writing a daily column for the Edmonton Journal and in the early 1980s, started submitting weekly columns to Real Estate Weekly.  Over the next 20 years, he published hundreds of articles and several books including a history of the Edmonton Police Service and the very successful Gateway City.

Alex enlivened Edmonton’s history, providing colour and personality to our characters and events. People fortunate enough to hear him speak listened attentively while he lovingly retold the tales of our past. His passing in 2001 left a gaping hole in the hearts of those fortunate to have called him friend and in the city he loved.

The Edmonton Historical Board commemorated Alex Mair with the honourary naming of 108th Avenue between 104th and 106th Streets Alex Mair Way on November 25th, 2003. 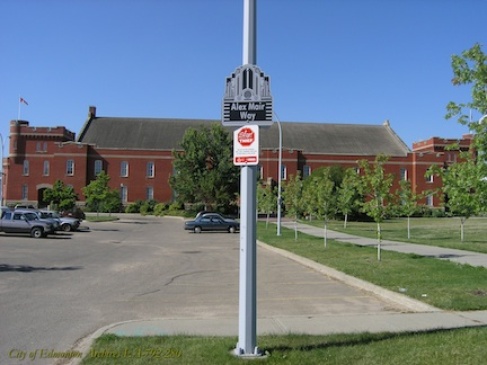 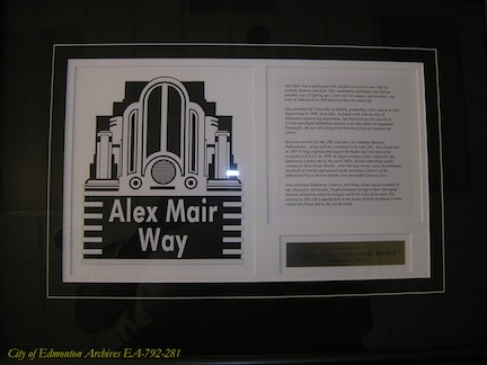 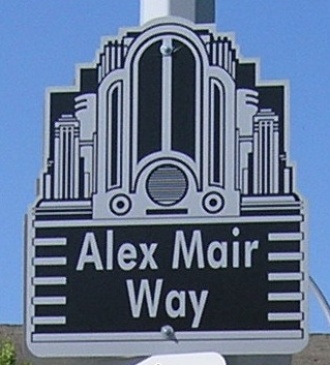