The Baker Clinic was designed and constructed in two stages. The first stage, designed in 1953, was a one-storey Prairie Style brick structure designed to be a health care centre and clinic. The entrance portico incorporates heavy, vertical, brick fins for contrast.

The 1959 three-storey addition is an early example of curtain-wall construction using two colours of metal spandrel panels that tend to diminish the apparent mass of the tower. Its massing seems inspired by the Bauhaus. An elaborate sunscreen system has been added to the south elevation to contribute to the design. Although separated by seven years, the 1953 building with its solidity serves as a suitable podium for the 1959 addition which is very light in appearance. 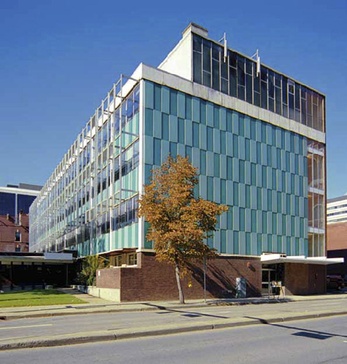