On May 21, 1912, Delmar Bard obtained building permit number 259 to construct this wonderful neo-Georgian style home. The permit listed Mr. Bard as the contractor and Mr. L. Keith as architect, and the cost was estimated at $6,500. Once completed this two-and-a-half-storey, 427 square metre residence was an outstanding addition to this area.

Delmar Bard led an interesting life coming from the American mid-west to Alberta in 1896. He worked at various occupations including Indian agent, provincial roads and bridge inspector and real estate speculator. His ingenuity is reflected in several aspects of the house. One main feature of the home is a built-in central vacuum system. Also, he installed an automobile turntable in front of the garage so he would not have to reverse his vehicle out of the driveway. This has since been removed.

The interior of the home is lavishly furnished with period stained glass windows imported from France. Fine oak woodwork is found throughout the home and the ceilings are trimmed with dentilled moulding. Built-in bookcases, leatherette wallpaper and some period light fixtures add to the charm of this residence.

Following Delmar’s death in 1938, the home was subdivided into suites. These divisions were later removed by Sue Bard, granddaughter of the original owner. Recently sold, the residence is undergoing further restorations and has been added to the Register of Historic Resources for the City of Edmonton. 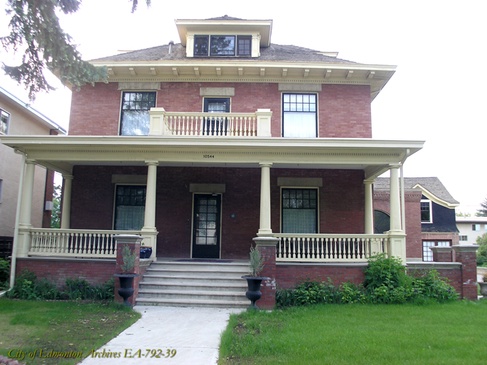 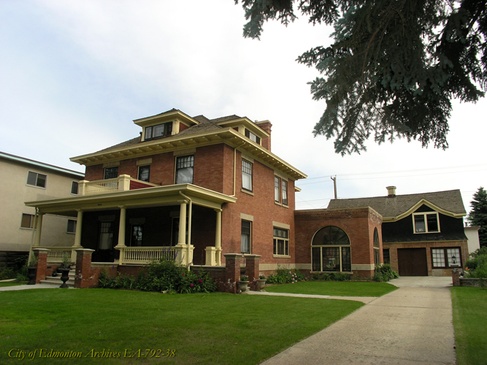 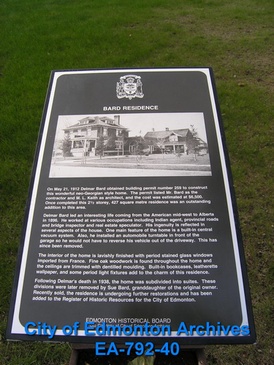