This building was constructed in 1912 as an apartment and retail complex on land purchased by a group of investors from Edmonton pioneer Malcolm Groat. These investors, collectively known as the River View Land Company, included Edmonton florist Walter Ramsay and well-known physician Dr. Edgar Allin.

Herbert Magoon and George H. Macdonald designed this three storey red brick structure along the lines of building constructed for the commercial aristocracy in England during the late-19th and early-20th centuries. The upper floors had hardwood floors, transoms with high ceilings and natural gas fireplaces. The Edmonton Bulletin described it as, “…a most desireable residential property in the west end.”

Residents of the 10 apartments likely did most of their grocery shopping at City Grocery Number 2, a major tenant on the main floor. The advertisements for the food store can still be seen on the upper wall of the south side of the building. In the 1950’s an annex was built on the eastern end of the building and housed more suites and a bank.

Over the years the building has accommodated various tenants including several restaurants and drugstores. But perhaps the apartment’s most famous tenant was World War I ace and legendary bush pilot Wilfrid “Wop” May.

In 1994, the Freeland family purchased the property and undertook extensive renovations transforming the rooms into the Victorian styled Glenora Bed and Breakfast Inn. The structure is listed in the city’s Register of Historic Resources and represents a fine example of early residential apartments in Edmonton. 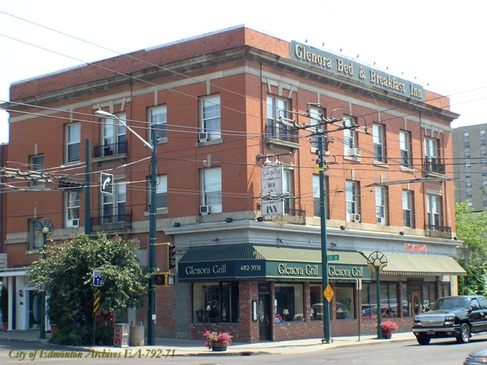 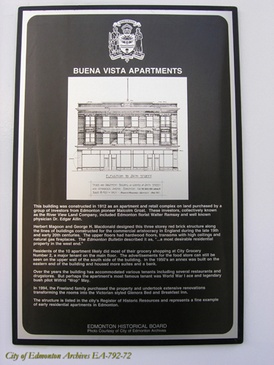