The Buttercup Farm House was built in 1912 as a two-storey residence with a side-facing gable roof, a wide gable roofed front dormer, a full-length front verandah and a second storey balcony. It is clad in clapboard siding and wooden shingles and has an attached single car garage. It is located on a residential street and occupies a single city lot in the Highlands, a mature neighbourhood in Edmonton. The municipal designation includes the exterior elevations, the attached garage. With the exception of the interior trims, mouldings, doors, fireplace and staircase, the interior is considered a non-contributing element.

Buttercup Farm House is significant for its design, as well as its association with the development policies of Magrath and Holgate in the Highlands subdivision.

Built in 1912, Buttercup Farm House is significant for reflecting design principles popular in Edmonton before the First World War. During the first decade of the 1900s residential construction in Edmonton favoured simple designs, prized natural materials and minimized decorations which at the time were considered by many to be useless. The practical application of this trend in design is evident in the composition of the Buttercup Farm House, which employed contrasting clapboard siding and cedar shingle cladding, both natural elements readily available at the time. Functional elements which added detail to the house while not compromising the desire for simplicity included the scuppers in the verandah and balcony and the large pillars supporting the shed roof over the verandah. The sculpted rafters under the eaves and similarly shaped brackets under the projecting window on the north elevation allude to the home’s structure and contribute to the popular principle of honesty in design. Buttercup Farm House is valued for embodying the design ethos of Edmontonians in the period before the First World War.

The Buttercup Farm House is significant for its association with residential development policies of Magrath & Holgate in the Highlands subdivision. The community was established in 1910 by real estate speculators William J. Magrath and Bidwell Holgate as an upscale bedroom community for Edmonton. They primarily subdivided lots and sold them to owners on the condition that the resulting houses have a minimum construction cost of $2,500. The early homes resulting from this development policy were all similar to Buttercup Farm House, and typically had large square footprints, were two storeys in height, and employed wood frame construction with clapboard and cedar shingle cladding. Buttercup Farm House and homes like it contributed to the sense of sophistication and class sought by early developers in the Highlands. As one of the better surviving examples the home now makes an important contribution to the character of the neighbourhood.

The heritage value of the Buttercup Farm House is expressed in such character-defining elements as:

I lived with my parents and two sisters in this house from 1942 to 1962. The house is built on 2, not 1 city lot. The name buttercup farmhouse is apt because there was an additional third lot which contained a barn. This adjacent lot was sold in the period immediately following the end of World War II. ,when the area was developed as a residential district. Prior to that time the area within 60th street to 55th Street and 112th to 118th Avenue was fenced and rented by my father for pasture. 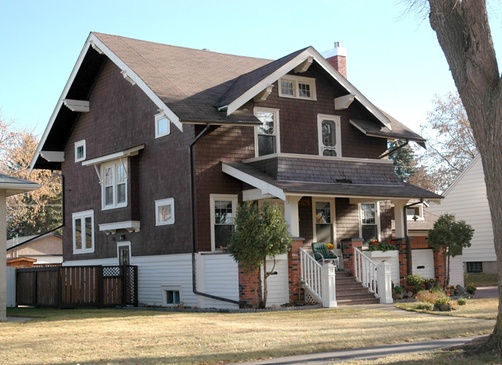