January 16, 1913. The temperature plunges well below ‑20°C. With inadequate water pressure to run their equipment, firefighters watch hopelessly as the inferno engulfs two buildings on this location and kills three people. This is one of the worst fires the city has seen, and it sparks rapid improvements in local fire safety practices.

William Allen, head of a Winnipeg investment consortium, acquired the charred site and built a replacement warehouse for the previous tenant, the Canadian Consolidated Rubber Company, in only two months. The designer and builder, the Canadian Stewart Company of Toronto, had just finished constructing the Macdonald Hotel when it installed the latest in fire safety technology in the new warehouse. Concrete encases the boiler room; metal sheaths the new fire doors; and the interior stairs feature steel risers, treads, and stringers. The windows on the east façade, where minimal setback was provided at the lane, offer increased fire and security protection owing to their metal sash construction and pivoting, wired glass infill panels. The west facing windows remain wooden and of double-hung sash construction.

The building’s design creates a more vertical emphasis than its neighbours, with its two-storey entrance and centre bay of windows located at the stair landing rather than on each floor, but the overall Commercial-style façade characterizes the warehouse district. Note the brick corbelled cornice featured at roof level, detailed front door surround, and the still visible advertisements painted by various tenants on the exposed portions of the east, north, and south walls.

This building served the rubber company until 1935, and is one of the longest-standing warehouses in the downtown core. Few significant exterior changes have been made by subsequent owners which have included the Kaufman Rubber Company, Cobogo Holdings Ltd., and the Army and Navy Department Store Holdings Ltd. 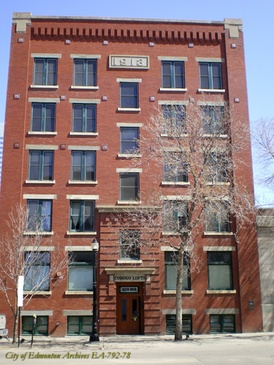 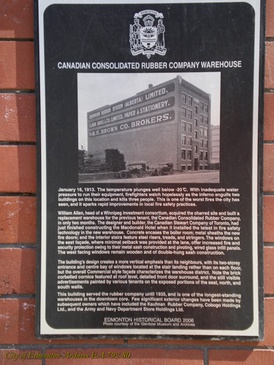