An Edmonton Bulletin report in 1929 described the bank as, “...one of the most highly furnished and finished banking rooms in Western Canada.” The east and south faces of the building are Manitoba Tyndal stone, used extensively throughout the city as a finish for financial and government buildings. There are three balconettes on the south face and four more on the east side with metal balustrades carrying the Bank’s monogram. Double Tuscan columns flank the front entrance along with the Bank’s insignia.

Inside, the bank featured a high dentilled plaster ceiling, polished walnut counters and ionic columns and pilasters. There was a modest level of bronze and marble detailing which is evidenced today in the stair serving the second to sixth floors. This building is an early example of reinforced concrete construction and utilized a thermostatically controlled heating system, unique for its time. The top four storeys of the five-storey building were rented to a variety of professionals and retailers over the years.

An addition in 1964 and further modernization in 1984 resulted in extensive changes to the exterior of the north portion of the bank and its interior. In 1998-99 the CIBC undertook a major renovation and upgrading program to refurbish the banking hall and re-establish this as a prominent building in downtown Edmonton.

The building has been placed on the City of Edmonton’s Register of Historic Resources. 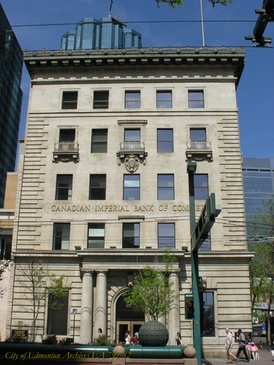 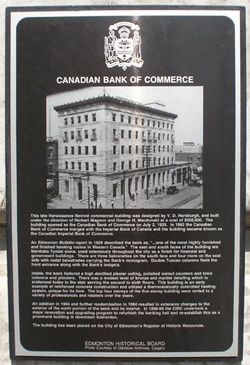