The Chandler Barn is a rare surviving example of a once common style of building in Edmonton. Up until the First World War, transportation was dominated  by horse-drawn vehicles, with the first automobiles only making their appearance on Edmonton streets in 1904. Instead of a garage for cars, many early Edmonton residents built small barns for a horse and carriage on their residential lots.

In 1912 Edward Chandler and his wife Lillian purchased a lot in the new residential area of Westmount. Chandler had moved to Edmonton from his birthplace in New Brunswick with his family as part of the great Alberta economic boom preceding the First World War. He worked as a lumber inspector and printer in Edmonton and was wealthy enough to apply for a permit to build a house and small barn and carriage house on the lot that same year. The house and barn still stand, and given its rarity the barn has been designated a municipal historic resource.

The basic design and materials used in the Chandler Barn remain substantially intact. It looks like a typical barn style structure that might be found on a farm, but reduced in size to suit a city lot. The barn has a mansard roof clad in cedar shingles and wooden shiplap siding. The barn also featured a large barn door on the west side of the building along with a hay loft door and a small square window that reflect its use for stabling horses.

The main significance of the Chandler Barn is the way it reflects a period in Edmonton’s History when horse drawn vehicles dominated city streets, and many city residents purchased hay not gasoline to duel their transportation. 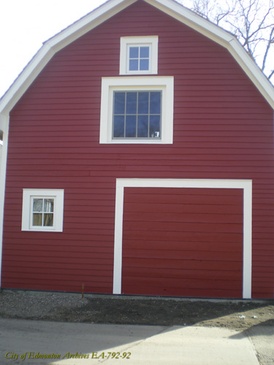