Before the First World War, more single-family dwellings appeared in Westmount than in any other Edmonton neighbourhood. Bordering the bank of Groat Ravine, the area was marketed to and attracted professionals, civil servants, and their families who desired affordable and refined residential life.

Stewart Hill, of the South Side Realty Company, constructed this home around 1912 with just such a family in mind. The Craftsman style house emphasized the use of natural materials and a simplistic design including elements such as the exposed wood frame construction, and timber siding and shingles. The designer emphasized earthiness and openness in contrast to the technological modernity and detailing stressed in the previous industrial era.

Unfortunately, as war broke out in Europe, the demand for houses in Edmonton dwindled. Local citizens confronted a deep recession and a significant number of lots reverted to the city for taxes. Westmount residences were no exception.

Charles and Mabel Barker, the first occupants of this house, moved here for only one year in 1915. At the time Charles priced hardware for Revillon Wholesale, but since emigrating from England in 1906 he also built and sold houses on the side, and the family moved between four different addresses from 1915 to 1925. Their last residence on 97 Street is similar to this one.

Once the Barkers left, this home changed hands many times until about 1930 when it became a long-time family residence to Leonard, Violet, Alan, and Dorothy Chappel. 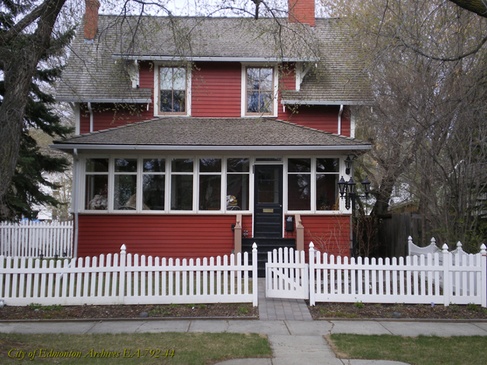 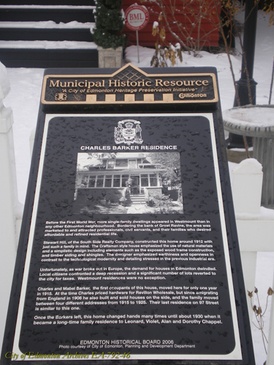