An 1886 telephone directory would have been easy to print. Four subscribers joined Edmonton’s first telephone exchange established by Alexander Taylor. Within twenty years, this creative entrepreneur had connected 500 patrons to the revolutionary telephone, and sold his company to the city.

Outgoing calls were transmitted through telephone exchange equipment, with switchmen and operators connecting each call to the receiving line. Edmonton built the first municipal exchange on this site in 1907. The next year the city became a telecommunications leader when it installed the first automatic dial phones in North America.

Edmontonians used 2,000 phone lines by 1910. By 1914 more than 9,500 lines buzzed with conversation. Construction began on a new exchange immediately west of the original building, and the City converted the first brick structure into the landmark Labour Hall. The exchange soon required even more space. In the 1940s city architect Max Dewar designed an addition that doubled the building’s capacity, and replaced the Labour Hall entirely. Remarkably, at the height of its operation, this exchange depended on twelve switchmen and two dozen operators to manage the equipment running through the huge building.

Dewar’s vision for the Churchill Wire Centre set the standard for the 1957 City Hall and for subsequent structures surrounding the newly conceived idea of a central civic square. With modern materials, innovative technology, and the age ofmachines as Dewar’s inspiration, the telephone exchange building remains a classic example of Moderne architecture. The style emerged from the Art Deco movement and introduced simple, smooth surfaces and the use of reflective material such as the glass blocks and polished black granite on this building. Dewar also flattened traditional details such as the fluted pilasters flanking the entrance and square dentils capping the highest windows. The winged figure holding lightening bolts and cables above the entrance represents new communication technology and typifies Moderne flourishes.

The addition allowed for 10,000 more phone lines, good for an estimated 20 to 25 years – or so they thought. With the good news of an oil discovery at Leduc, and a rapid population increase, Edmonton witnessed an economic revival after the Churchill Wire Centre opened in 1947. Within two years, almost 7,300 of the available lines had been used and the downtown building eventually became too cramped and expensive. The Churchill Wire Centre was abandoned, but community pressure concerning the building’s historical significance saved it from demolition in the 1990s. 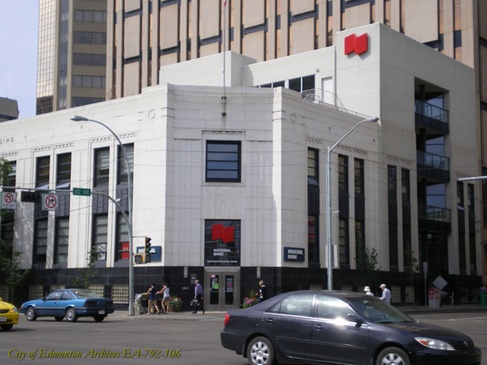 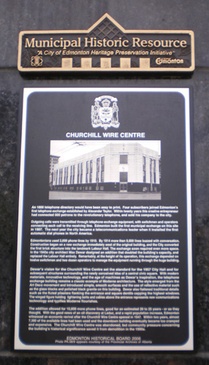