The 26-storey CN Tower opened February 14, 1966, and was Canada’s tallest building west of Toronto. It was an imposing landmark, the first of a series of major high rises that were to define Edmonton’s downtown skyline. This building exemplifies the modern notion of a  tower sitting on a podium, first seen in New York’s 1953 Lever House by Skidmore Owings and Merrill. The podium rests on a glass-enclosed tall ground floor railway stations and consists of a three-storey concrete parking structure, which is fully clad in pre-cast panels for the appearance of solidity. This solidity is countered by the verticality of the tall, thin office tower with slightly curving facades. The 22-storey tower is clad in glazed curtain wall with pre-cast fins that exaggerate the height of the building. The tower-on-podium design can be seen in other Edmonton buildings of the time such as the University of Alberta Students’ Union Building and the Campus Tower building at 87 Avenue and 112 Street.

The CN Tower is now owned by Tawa International Inc. and the last of the CN employees moved out of the building in 2008. The building suffered structural damage to the exterior on July 18, 2009 during a severe thunderstorm. Two vehicles were crushed by the falling debris at the base of the building.

Was there a bar with pool tables in the Edmonton CN tower in 1972? 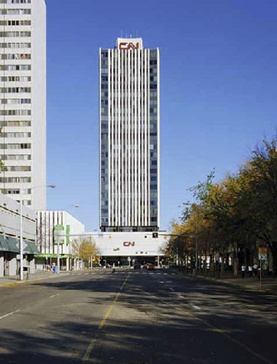