In 1910 Eliza Chenier obtained a building permit for a duplex to be constructed on this site.  Mrs. Chenier was the widow of Joseph Chenier who had owned a general store on Jasper Avenue, and is an interesting example of an early Edmonton female entrepreneur.  In addition to her real estate investments, she was also listed as co-owner of the Strathcona Hotel from 1912 to 1923 with a business partner Joseph Beauchamp.  Eliza Chenier lived in one half of the duplex until 1926 and Joseph Beauchamp occupied the other until 1919.

Their ownership of the Strathcona Hotel did not work out well and their mortgage company foreclosed on the partnership in 1923, just before the repeal of Prohibition would make most hotels profitable again.  Nonetheless, Beauchamp was a well-known local hotelier having owned or managed several hotels in Fort Saskatchewan and Edmonton.  He is best known for his association with the Cecil Hotel from 1924 until his death in 1949.

The heritage value of the duplex also is found in its design and architectural details.  Its symmetrical form and square, box-like layout marks it as a variation of the classical four-square house pattern. However, as a duplex it is much larger than most Edmonton residences built in this style.  The full length front porch and smaller central second floor porch, wide window casings with decorative crowns, and extensive use of clapboard all reflect building styles and tastes in the early 1900s.  Along with the other heritage buildings in the area, it helps create a sense of the streetscape in a pre- First World War Edmonton neighbourhood. 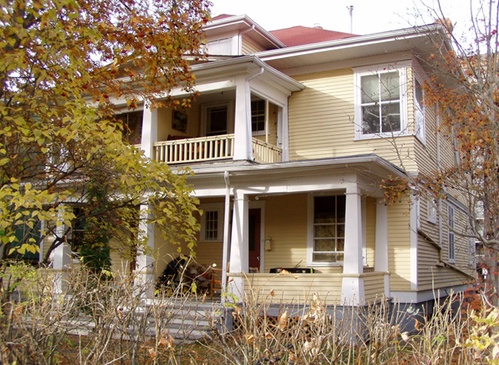 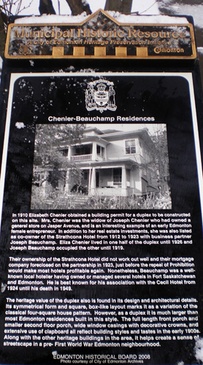