The Dominion Hotel was built in 1903 by Robert McKernan, whose son, John W. McKernan, built the architecturally unique Princess Theatre across the street in 1914. At the time of the Hotel's construction, it was the most ornate of the buildings on Whyte Avenue. The architecture consisted of a relatively simple rectangular three-storey brick structure. The façade, however, consisted of elaborately decorated wooden balconies topped by an ornate central cupola giving the structure a distinctive Victorian Appearance. The building originally functioned as a hotel with the ground floor containing the lobby, dining facilities and a beer parlour. The hotel function ended with prohibition, when the upper floors were converted to apartments and sleeping rooms. The ground floor has been occupied by a variety of retail outlets. The building was almost entirely reconstructed in the early 1980s.

Built by Robert McKernan, an early settler and later realtor, the Dominion Hotel was the most decorative building on Whyte Avenue at the time. It is one of the first hotels in Strathcona, a local landmark and generally important to the historic appearance of Whyte Avenue and the Strathcona Conservation Area. The Dominion Hotel served as a landmark for the Strathcona community lending an air of prosperity, with its ornate appearance to the growing community.

The Dominion hotel was one of the more striking buildings on Whyte Avenue. Nearly original façade-stone cornices - brick facade - some original ornamental woodwork remains. It has balconies on upper two floors supported by ornate wooden pillars. 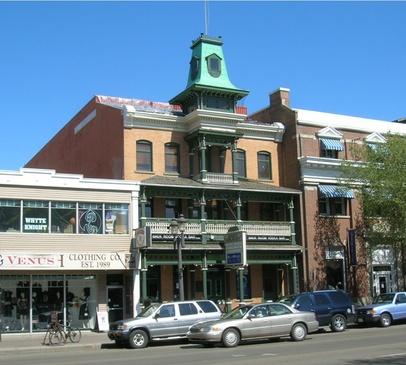