The Douglas Block is an early twentieth century, three-storey building situated on a single lot in Edmonton's historic Strathcona commercial district. The building possesses a red brick facade and is accented by several classical details, including stone pilasters, keystones above each window, and a central pediment with decorative detailing and the words "DOUGLAS BLOCK" set in relief.


The heritage value of the Douglas Block lies in its impressive, classically-inspired architecture. It also possesses heritage value for its association with the commercial development of Edmonton's Strathcona district and its connection to prominent Edmontonians James and Robert Douglas.

In 1899, the settlement of Strathcona was incorporated as a town. In the same year, James and Robert Douglas established a small general goods store in the community. The business produced steady profits and grew; by 1911, the store had expanded into the largest general retail establishment in Strathcona and boasted 16 staff members. The Douglas brothers decided to invest some of their accumulating wealth in real estate speculation. The following year, they commissioned well-known local architects Wilson and Herrald to design a new commercial building to be erected on Whyte Avenue. The Douglas Block was constructed in 1912, during the final years of Edmonton's pre-World War One building boom. It reflects the robust optimism of the period and expresses the civic prominence of the Douglas brothers. James Douglas was particularly esteemed, serving at various times as the President of the Strathcona Board of Trade, the Member of Parliament for Strathcona, and the Mayor of Edmonton. Though the Douglas brothers never housed their own retail enterprise in the Douglas Block, it served as striking symbol of their place within the community and remains a strong reminder of the early commercial development of Strathcona.

The Douglas Block embodies a classically-inspired design. The locally-made red brick exterior is accented by several classical elements, including stone pilasters, keystones above each window, and a stone cornice and pediment. The stone pilasters divide the front facade above ground level into three bays. The symmetry of the front facade, the diachromatic appearance of the brick and stone, and the visual impact of the crowning cornice, parapet, and pediment impart to the building an air of elegance, balance, and stability. At the time of its construction, the building provided floor space for retail outlets and upper floors for apartments. It exemplifies turn-of-the-century boomtown architecture and is an integral dimension of Old Strathcona's historic streetscape. 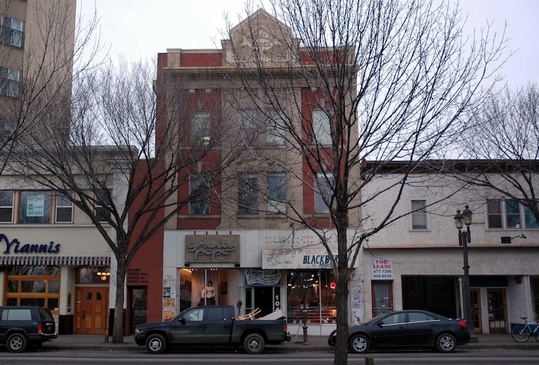