This distinctive Streamline Moderne house is situated on Churchill Crescent in Glenora. Montreal businessman and developer James Carruthers bought land originally owned by Malcolm Groat and began to develop this west end neighbourhood in 1906. Carruthers named the area and placed a caveat on future development that dictated a high level of design standard. These regulations were implemented to ensure that Glenora would remain a prestigious development. It succeeded in its aim and very soon became an enclave of the professional and commercial elite of Edmonton.

The first resident of this house was Dr. L.A. Miller in 1937. The building permit is dated April 20, 1937, making this house a very early example of the Streamline Moderne Style in Edmonton. George Prudhamwas an active building and developer in the 1930s. In 1942 he incorporated Prudham Construction Ltd. and in 1944, he opened Prudham’s Lumber Yard south of Whyte Avenue. In 1949, he was elected as a Liberal MP for Edmonton’s west end.

This impressive residence is an excellent example of the Streamline Moderne Style that is typified by the use of strong horizontal composition, flat roofs, stucco walls, corner windows, continuous ‘speed lines’ in the stucco above the upper windows., curved entrance canopy with recessed entrance and an incorporated garage with a broad canopy that is supported on triple steel columns. The room above the garage is a sympathetic addition. 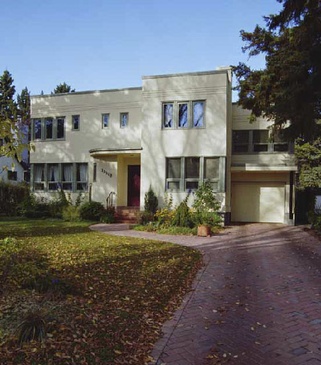