Eastglen Composite High School is located at the eastern edge of the Bellevue neighbourhood, which has existed since 1907 when it began to be developed by the Magrath-Holgate real estate company as Bellevue and Bellevue Addition. Located on the scenic northern escarpment of the North Saskatchewan River, it lives up to its name.

The school name was selected by the Bellevue Home and School Association. The estimated cost of $2,220,000 made Eastglen the second largest composite high school in Edmonton, after Victoria Composite High school. Premier Ernest C. Manning was at the official opening in November 1954. Major Ernest E. Hyde was the first principal having been principal of the expanded and renamed Eastwood School in 1926, and an instructor of the Eastwood Cadet Training Program in 1944. Because of the acute shortage of school space for the burgeoning student population in Edmonton during the 1950s, the first 427 students began classes before the official opening of the school, transferring from Eastwood on March 15, 1952. The Edmonton Journal reported that “work was rushed to get the academic wing ready as soon as possible.”

Eastglen Composite High School is an excellent example of the International Style that is typified by the use of clean horizontal lines, flat roofs, large expanses of horizontally-composed windows, two colours of brick used in a non-conventional style, framed windows in Tyndall stone and a ‘antique verde’ marble feature wall at the entrance. At the time, Eastglen was the second largest composite high school in Edmonton, after Victoria Composite High School. Premier Ernest C. Manning was at the official opening in November 1954. 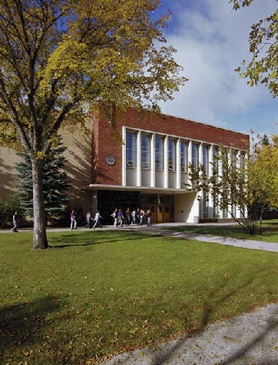