Nestled in Coronation, Queen Elizabeth II Planetarium was one of the first planetarium buildings ever built in Canada. With the entrance raised on four steps, the form of the Planetarium seems to hover above the ground. The structure frames the window and door openings. The building exterior combines modern materials such as gold anodized aluminum frames with rustic hewn field stone. A bold and structurally daring concrete cantilever provides a canopy over the main entrance. On the interior, variegated hardwood contrasts terrazzo and tile flooring. The dome, originally orange, was later painted silver. Directly in front of the Planetarium, Edmonton artist Heinrich Eichner created mosaic tile interpretations of the twelve constellations in the zodiac.
During the visit of Queen Elizabeth II in July of 1959, Mayor William Hawrelak declared:

“In commemoration of this Royal Visit in the year of our Lord 1959, it is the wish of your loyal and devoted people to erect a building of masonry, brick, and stone at this location. A structure that will serve during the years ahead as a practical and pleasurable monument to perpetuate the memory of this great occasion. The aesthetic value of this Planetarium will soon give the development of the Canadian parkland, an additional beauty dedicated to the welfare and convenience of our citizens. May it always be in keeping with the spirit in which you come to us, friendly, warm hearted and sincere. We respectfully request of your Majesty’s permission to name this building the Queen Elizabeth II Planetarium,. In your presence today we humbly demonstrate our allegiance, our gratitude, and our affection.”

The Planetarium’s official opening ceremonies were held on September 22, 1960. Mayor Roper presided over the dedication of the Planetarium and Chief Justice C.J. Forward of the Alberta Supreme Court read a letter of congratulations from the Queen’s Secretary. The University of Alberta sent Professor E.S. Keeping to present a 68 pound fragment of the Bruderheim meteorite to the Planetarium. The fragment was made the centre piece of the building’s astronomical display.

The number of visitors reached a peak of 33,500 in 1967. The Planetarium closed its doors on December 31, 1983 after the opening of the new Edmonton Space and Science Centre (now Telus World of Science). The Queen Elizabeth II Planetarium is one of only a few Modern buildings on the ‘A’ list of historic resources with the City of Edmonton. 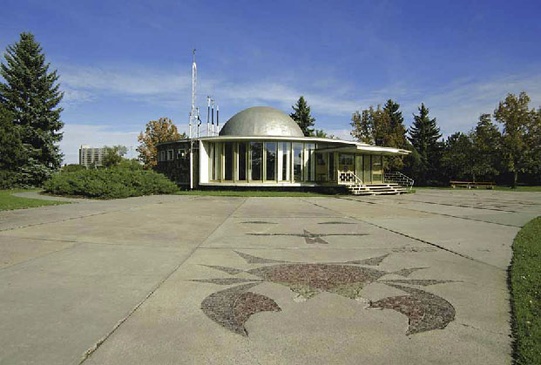 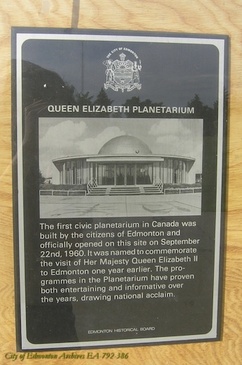