In 1959, the religious community of the Filles de Jésus purchased an entire block for their new provincial residence on 91 Street where they built Maison Saint-Joseph, which was completed in 1961. Until this time, there had been a constant augmentation in recruits for most religious communities and several of them purchased large tracts of land or property in Edmonton for their new provincial head offices, residences and retreat centres, as did the Grey Nuns at 9810-165 Street and the Sisters of Providence for the Providence Centre at 3005-119 Street. With career options opening up for young people during the 1950s and 60s, recruitment slowed to a trickle and thirty years later, retrenchment became necessary.

The Grey Nuns sold their large building to an assisted living foundation renting a wing from the new owners for their present needs. The west-end francophone parish of St. Anne, which used the Grey Nuns’ chapel for their services for many years, had now been regrouped with that of Saint-Joachim parish. For the time being, Providence Centre continues to provide a variety of services such as conference rooms and continuing care for elderly members of their community as well as from other feminine religious communities. The first church of the francophone parish of St. Thomas d’Aquin, was located on the grounds of the Collège Saint-Jean.  In 1978, the Filles de Jésus sold the easternmost portion of their property to St. Thomas parish for a new church, as the building on the Collège Saint-Jean property was much too small for the growing parish. The new parish church was officially consecrated on December 25, 1980. 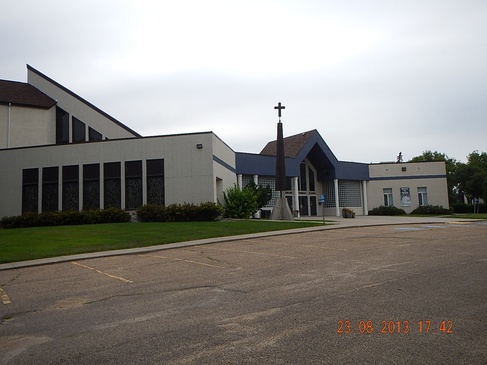