Built in 1861, the Father Lacombe Chapel is Alberta’s oldest building and was at one time the centre of the French-speaking Métis settlement of St. Albert. Interpretive guides lead tours (available in English or French) through the chapel and the historic Mission Hill site and demonstrate activities and skills of the time. The site also includes the crypt where Father Lacombe, Bishop Grandin and Father Leduc are buried.

The chapel was built by Métis craftsmen using "post on sill" (or Red River frame) construction and served the community until 1870 when it was replaced by a larger church. The chapel survived, however, because it was reused for storage. In 1929 it was converted into the Father Lacombe Museum, and in 1977 it was declared a provincial historic site. In the early 1980s it was acquired by the Alberta government and moved to its present location on Mission Hill in St Albert.

Father Lacombe worked with just a few Métis men to build this little chapel when they arrived from Lac Ste. Anne in 1861. It is what is called “fur trade construction”, designed to be taken apart and moved as necessary. The post and sill building is made with slotted vertical posts into which the wall pieces were slipped, and then held together with wooden pegs. It took 10 days to build, has been moved twice and is now back in its original position on the hill, overlooking the Sturgeon River. 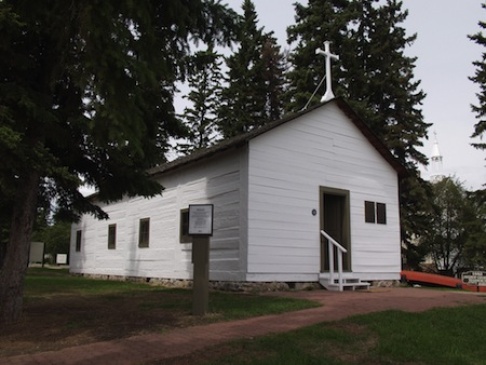