This historic painting depicts the gathering of the Fathers of Confederation at the Quebec Conference in 1864.  The original, painted by Robert Harris in 1883-4 was destroyed in 1916 by a fire at the Parliament Buildings in Ottawa.  Fortunately, this copy had been painted in 1914 by Frederick S. Challener, a reputed mural painter.  It was hung in the new Macdonald Hotel in 1915.  Mr. Challener painted a second, larger copy between 1917 and 1919, which now hangs in the legislature building, Queen’s Park, Toronto.

The painting is oil on unprimed canvas, directly applied to the plaster wall.  It underwent a careful conservation process before this hotel re-opened in 1991.

This plaque was presented to Canadian Pacific’s Hotel Macdonald by the Edmonton Historical Board on December 4, 1991 to commemorate a famous Canadian painting. 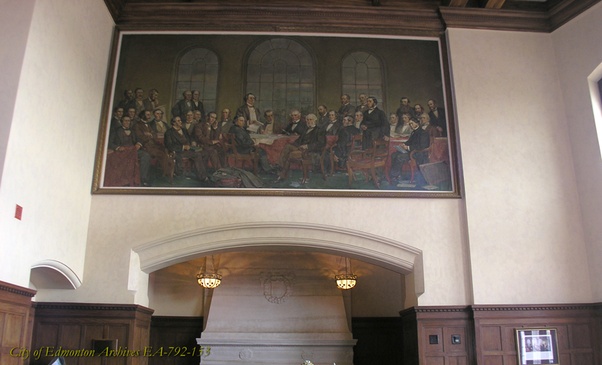