The Frederick S. Jones Residence was built in 1926 as a one and one-half storey clinker brick home with a side facing gable roof and two single-storey hipped roof projections on the northwest and southwest corners. It is located on the corner of a residential street and occupies four city lots in the Edmonton neighbourhood of Calder. The municipal designation includes the exterior of the home. The interior and the landscaping features are considered non-contributing elements.

The Frederick S. Jones Residence is valued for its use of clinker brick. Although clinker bricks had previously been discarded as waste material unsuitable for construction because they were over-fired, burnt, and misshapen, builders in Edmonton began to use the brick for their aesthetic properties as early as 1913. The uneven colour and texture of the clinker brick cladding on this particular home produces an earthy texture and relatively unique appearance. This effect is reinforced through the combination of clinker brick seconds, larger misshapen pieces and field stone making for an irregular but carefully planned pattern of bricks.

The Frederick Jones Residence is also valued as reflecting the workmanship of Frederick S. Jones, a master bricklayer. The home was built in 1926 by Frederick S. Jones, a talented bricklayer who was involved in the construction of several high profile buildings in Edmonton, including the clinker brick masterpiece Holy Trinity Church. Similar to Holy Trinity, Jones used his skill and experience as a brick layer to incorporate large, misshapen piece of clinker brick to achieve a unique look for his house. These details show Jones’ mastery of his craft and are present in the best examples of his work. The skilled use of clinker brick makes the Frederick S. Jones Residence an excellent example of one of Edmonton’s few vernacular styles of construction.

The heritage value of the Frederick S. Jones Residence is expressed in such character-defining elements as:

Jones built this house in 1926 from plans obtained through New York based magazine The Touchstone, a popular means of obtaining building plans in Edmonton during the early 20th century.

Frederick S. Jones was also an accomplished gardener, and began cultivating 40 acres around this property shortly after his arrival in Edmonton in 1904. In 1905 Jones planted a white spruce on his property, which still stands just behind the home. This tree received a plaque in 2007 from the Heritage Tree Foundation in recognition of its historical value as part of the Alberta Heritage Tree Project. Jones’ skill with plants was recognized in the late 1930s when he won several awards from the Edmonton Horticultural Society for his yard. Frederick S. Jones lived in this residence until his death in 1954. The home has since remained in the Jones family, and is currently occupied by Jones’ granddaughter, a well-known horticulturalist and instructor in the Faculty of Agriculture at the University of Alberta.

He was my husband's Grandfather, and a grand man indeed.He encouraged his grandson to lay a brick patio from left-over-used bricks. I recall it being very rustic, we were amateurs and both of us worked at it. It was an improvement, also he aided us in planting an Apple tree, two in fact, one for each of our sons, David 3 and John 2. The trees thrived. He enjoyed visits to our house and interacting with his grandchildren. He brought them a small hammer and tried to show them how to use it on a Bird House. He was 87 at the time and was impressed with the size of our Tomato plants. We had discovered Rx 15, a new fertilizer. He had a soft voice and would often say, 'Ah' to acknowledge a comment. He was much loved by all of us, and missed. It is a comfort to know the place he developed is in good hands and appreciated by his Granddaughter Gail Rankin.

I love this house and have done so since the early 60's. It is a beautiful example of the ingenuity of the people of the early 1900's. This is a home that remains outstanding in a class by itself when compared to the plastic shells we now produce. 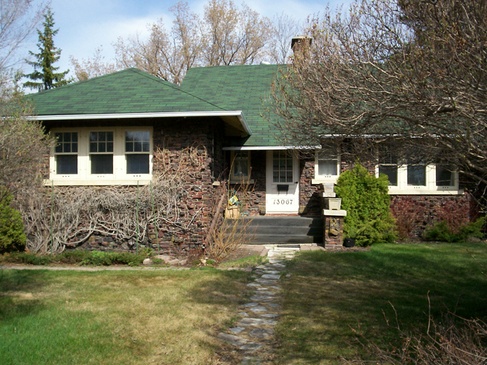