The Garneau Theatre is a prominent cinema and commercial retail structure at 109 Street and 87 Avenue in the city of Edmonton. Constructed in 1940, the building is situated on four city lots located just south of the High Level Bridge in the neighbourhood of Garneau. The facades and marquee incorporate Art Deco elements executed with two-tone brick and stucco. The theatre’s main entrance is set back from the three commercial storefront units. The designation is limited to the exterior facades and the theatre’s lobby: the projection room, theatre and the interior of the three commercial spaces are considered non-contributing elements.

The Garneau Theatre is significant for its Art Deco Style and its status as an Edmonton landmark.

Built in 1940, the Garneau Theatre is valued as a significant example of the local variation of the Art Deco style. The Art Deco style was an early incarnation of the modernist movement in Edmonton that has had an enormous effect on the architectural character of the city. The facades incorporate Art Deco elements that were common to modernist architecture in the early 1940s. The Art Deco influence is reflected in the building’s rectangular form, the prominent horizontal lines of the front façade and the rear brick portion, and the form and massing of the marquee. The use of colour also shows a modernist influence; two-tone paint is used to enliven surfaces and distinguish geometric decorations such as the storefront speed lines and the stepped marquee. This use of colour is also evident on the rear portion, where darker bricks form a series of broad horizontal lines. These stylistic features reflect the work of its architect William G. Blakey, a modernist architect of considerable importance in Edmonton.

The heritage value of the Garneau Theatre is expressed in such character-defining elements as:

Other buildings designed by William G. Blakey include the Masonic Temple, Christ Church, the west wing of the Glenrose Hospital, the Roxy Theatre and his own house, the William Blakey Residence.

In 1942 a rooftop penthouse containing a fan room and lounge area was built. It was designed by Rule Wynn Rule, another local architectural firm influential in Edmonton’s modernist built landscape. 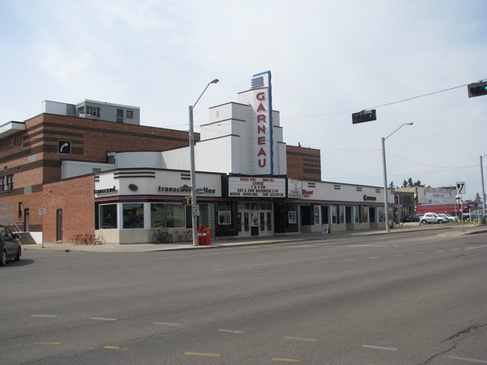 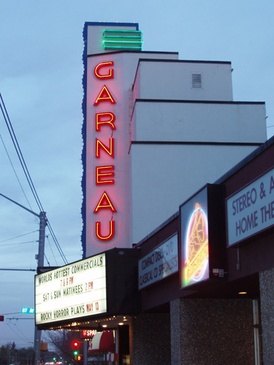