The George Harcourt Residence is a two and one-half storey modified Foursquare with a low pyramidal roof, clapboard siding on the main floor, wooden shingles on the second floor, and an offset front porch. Constructed circa 1909, the house is located on a residential street and occupies a single lot in the City of Edmonton's Windsor Park neighbourhood.

The George Harcourt Residence is significant for its association with the development of the neighbourhood of Windsor Park and its Foursquare design.

The George Harcourt Residence is valued for its Foursquare design. The Foursquare design was common in Edmonton during the first two decades of the 20th century. Typical four square characteristics of this home include the hipped roof with a wide hipped dormer at the front of the house, the overhanging eaves with decorative eaves brackets, and the contrasting shingle and clapboard cladding. Geometrically patterned windows are also characteristic of the Foursquare design, exhibited in the diamond pattern mullions of the George Harcourt Residence, as are the two broad, flat chimneys. The single ionic column supporting the front porch is a less common feature, as Foursquare homes typically incorporate square porch supports.

The heritage value of the George Harcourt Residence is expressed in such character-defining elements as:

Dr. George Harcourt, former Deputy Minister of Agriculture (1905-1915) and Professor of Horticulture at the University of Alberta (1915-1934), moved into the home around 1919, and lived there until 1942. Aside from his involvement in government and education, he was very influential in Edmonton's early horticultural community.

Harcourt responded to the federal government's desire to use undeveloped urban land to grow food, becoming the first president of the Vacant Lot Garden Club in 1916. Vacant lot gardening was a popular program in Edmonton through which numerous lots, left vacant after the real estate collapse of 1913, turned into productive gardens that fed many Edmontonians. 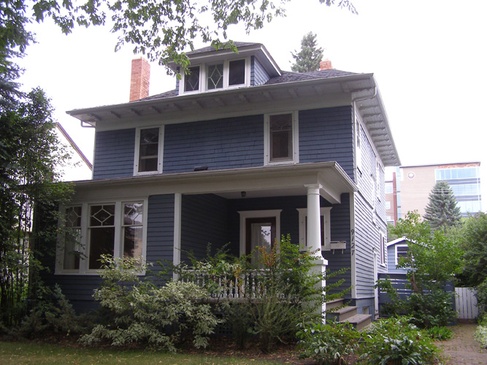