Government House is on a low promontory overlooking the Saskatchewan River in the Glenora area, a residential neighbourhood west of downtown Edmonton that was developed in the first decades of the 20th century. This building was constructed in 1912-13 on a large 28-acre property acquired in 1910 by the Province of Alberta for use as the official residence of the province’s lieutenant governors. The property’s surroundings have changed considerably since the construction in 1968 of the Provincial Museum of Alberta immediately north of the building. There are now parking lots to the south and the west, as well as a large, grass-covered, landscaped area that includes, among other things, formal gardens, a fountain and a sculpture.

Government House is of historical importance because:

This impressive three-storey building was designed in accordance with the plans of architect Richard P. Blakey, who was chief architect of Public Works for the Province of Alberta from 1912 to 1923, under the direction of Allan Merrick Jeffers, chief architect of the Alberta Legislature Building (1907-13). Massive in appearance, it is made of sandstone from Calgary: the stones, which vary in size, are laid horizontally, while the trim and cornerstones are cut stone. It is irregular in shape and has gabled roofs. The main façade, which faces east, is uncompromisingly symmetrical. It has two large protruding gables flanking a carriage entrance made up of classical columns and pillars and topped by a balustraded balcony. The fairly simple ornamentation is limited to crenels and escutcheons carved in stone.

The south façade is also imposing. It has a single large protruding gable to which is joined a semicircular rotunda with rectangular windows grouped together and topped with a crenel. A large covered gallery, whose twinned classical columns support a balustraded balcony, runs along the rest of this façade.

The main public spaces for receptions are on the ground floor. The vestibule opens onto a spacious central hall around which the various rooms are arranged: the former library and the music room on the left, and the cloakrooms and current administrative offices on the right. The large dining room, which was originally two rooms (the dining room and the drawing room) is at the back. This floor, which has been restored, still has some of its original elements, such as doors, cupboards, trim, and panelling. On the second floor there is a rectangular receiving area. The far end of this space opens onto a balcony, and a small exhibit relating the history of the building has been set up on the opposite side, with display cases containing a few photos and artifacts. Five small meeting rooms surround this central space. The top floor, the third, holds the Alberta Room, a spacious conference room.

- From: Canada’s Register of Historic Places 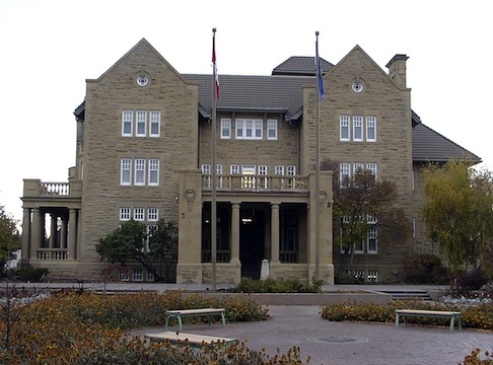 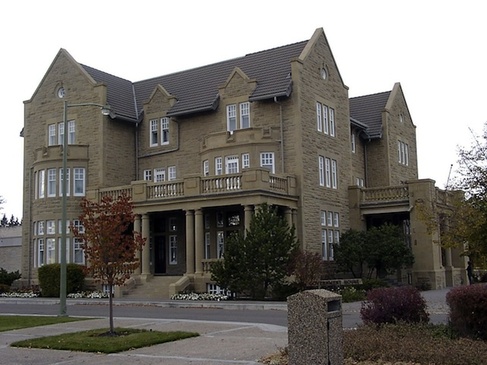 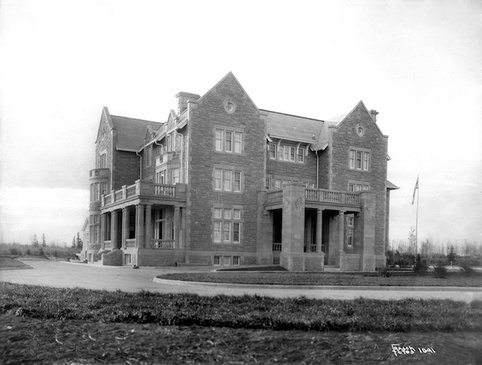