The legacy of Bishop Vital Grandin, missionary with the Oblates of Mary Immaculate and first Bishop of the Catholic Diocese of St. Albert, is recognized with several places in Edmonton that bear his name. Grandin Catholic School was built in 1914 near the site of the earlier St. Joachim’s School that was opened in 1888 by the Sisters of the Fidèles Compagnes deJésus. This congregation, originally from France, had moved to Britain in 1832. As a result, the sisters were bilingual when they arrived in Edmonton. Across the street from the school is the Grandin LRT station. The small park adjoining the school also bore his name for many years, but it was recently changed to honour Monsignor Bill Irwin’s role in organizing Catholic Social Services.

Bishop Grandin (1829-1902) was born near Le Mans in the Sarthe region of France. He joined the Oblates in 1853 and was ordained to the priesthood the following year in Marseille. He left that same year for the missions of Red River. Soon after, he was sent to minister to the Dene and the Metis of the Fort Chipewyan region from which he established and visited the Catholic missions of the Far North. He was ordained as a bishop in 1857 and remained in the North for the next ten years. In 1869, he established his residence at St. Albert where he was able to continue devoting himself to the people of the northwest. He vigorously defended the rights of Catholic schools and attracted many religious communities to the Diocese of St. Albert at a time when health care was not a responsibility of the state. His body was laid to rest in the crypt of the Catholic Church of St. Albert.

The naming of the Grandin LRT Station and the series of murals representing the contributions of Bishop Grandin was brought about through the initiative of the predecessors of Francophonie jeunesse de l’Alberta, a youth organization that, in 1989, fundraised to pay for the panels painted by Sylvie Nadeau and their installation in the LRT station. The panels depict Bishop Grandin and his work in the religious domain, and show the evolution of transportation in the Canadian northwest, as well as the continued development of the neighbourhood of Grandin LRT Station.  2014 saw an addition to the mural that addressed Edmonton's residential school history from an Aboriginal perspective. Displayed on the station's opposite wall, artist Aaron Paquette's new mural features imagery and symbols representing 10,000 years of Aboriginal history in Edmonton, including a round dance, a Cree Thunderbird, and the White Buffalo. The artwork, along with additions to Nadeau's original mural, was unveiled during the Truth and Reconciliation Commission Alberta National Event in March 2014 and represents the journey towards healing for residential school survivors and reconciliation for all Edmontonians. 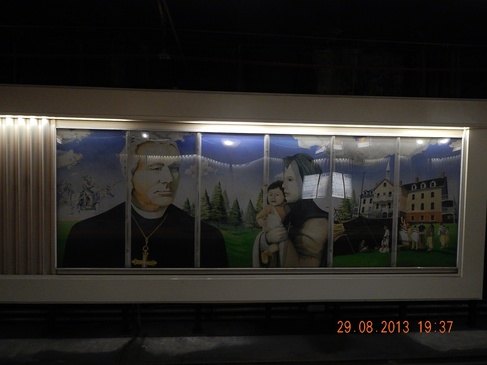