"For decades this site was occupied by the R.C.M.P. or its predecessor.  Upon moving from Fort Saskatchewan in 1909 the headquarters of “G” Division R.N.W.M.P. was domiciled in the James Cameron house here, but in May 1913, began moving into these more modern structures."

Historical Value
The Grierson Centre is associated with the development of the RCMP in the 20th century. The building’s inception and continuing additions reflect the administrative and directional evolution of the police force from frontier policing to national law enforcement. Since 1975, the building has belonged to the Department of the Solicitor General and has been used by the Correctional Service of Canada as a halfway house for paroled prisoners and for other functions of the penitentiary service.

Architectural Value
The Grierson Centre is a good example of a permanent and carefully styled structure, designed and specifically built for the purposes of the RCMP. It provides an informative visual chronology of the architectural preferences of the RCMP at this location. The earlier sections, designed in the Collegiate Gothic and Tudor Gothic styles indicate something of the status, needs, and evolution of the forces between 1912 and 1936, while the later modern addition is a variant of the institutional blocks erected in some numbers for RCMP headquarters purposes in the 1950s. Good craftsmanship and materials are evident throughout.

Environmental Value
The Grierson Centre reinforces the institutional character of its former RCMP compound setting at the edge of downtown Edmonton. It is a familiar building in the area.

Missing from these pictures is the side showing the old horse stables that existed in the 1940 s. My grandmother's rented house was across the street, almost directly in front of the gated entrance to this facility. The houses that existed on the river side of the street no longer exist. 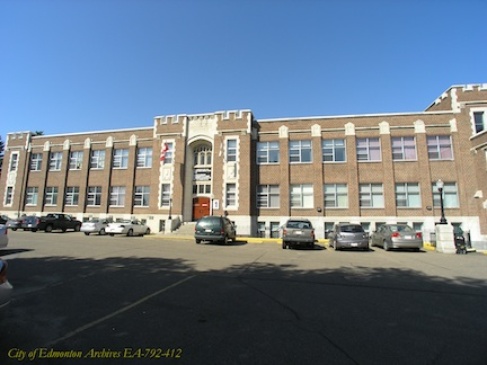 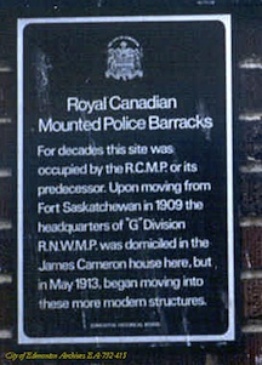