In 1941, a hangar now designated Hangar 14, was built at Blatchford Field. The hangar was part of the facilities being erected across the country to house the British Commonwealth Air Training Plan. The Plan was an agreement between Canada and other members of the Commonwealth to train aircrews in Canada for duty during the Second World War.

Edmonton was chosen as the location for an Initial Training School, an Elementary Flying School and an Air Observers School. Primarily used by the Air Observers School, Hangar 14 also stored Ansons and other planes used in training. Hangars built for the Air Training Plan were of a standard design that could be doubled in width and depth, depending on the size of the school and the facilities required.  Hangar 14 is both a doublewide and double-long model, and is the only remaining hangar of that type left in Canada. It represents not only Edmonton’s important role in the Commonwealth Air Training Plan, but the international role that fulfilled during World War II.

When the war ended, Hangar 14 became the home of the Royal Canadian Air Force 418 City of Edmonton Squadron, after they had returned triumphantly from Europe in 1946. it remained their home until 1956 when they moved to the new air base at Namao. From 1957 to 1991, the building served a variety of needs and purposes. Since 1991 it has been the home of the Edmonton Aviation Heritage Society, and is designated as a provincial and municipal historic resource. 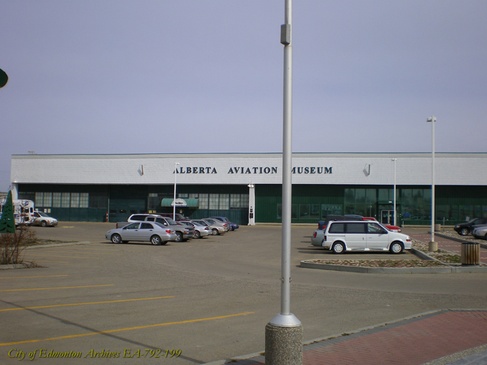 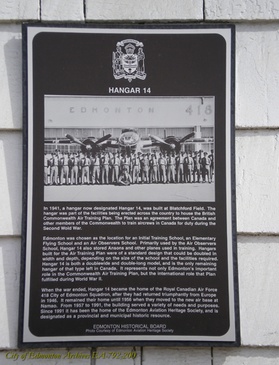