The area near the High Level and LRT bridges contains an array of well-preserved archaeological sites. If you walk down to the river bank along a cut made to construct the LRT bridge, or look down from the High Level bridge to the south bank to your right, you will see a large exposed face of the river bank. It contains numerous, well defined layers. Every year as the river erodes the banks, parts of archaeological sites are washed away and lost. Inspection of the flood plain sediments reveals bone scraps combined with ash and charcoal from both historic and prehistoric occupations. The flood plain sediments also reveal another ash deposit, a volcanic ash fall that covered a vast area of northwestern North America about 6800 years ago.

The massive eruption of Mount Mazama was about ten times the magnitude of Mount St. Helen’s in 1981 and has given archaeology a valuable dating technique. Archaeological remains found below the ash deposit are older than 6800 years above and those above the ash are younger. The Mazama ash exposed near the south abutment of the LRT bridge is part of a layer cake of sediments. These layers contain the most recent (A.D.1915) flood events and those that occurred well before the Mazama ash fall. When you touch the layers below the ash, you are reaching back more than 7000 years into the past.

Prior to the construction of the High Level bridge, this portion of the south bank of the river was the scene of several bustling industries. Some of the remains from these enterprises are now visible between the High Level and LRT bridges. If you search carefully, you will find building cellar depressions, chimney foundation, trash deposits, brick kilns and borrow pits. These features relate to Firmin Bedard’s Tannery (1895-1915) and Frank and John Pollard’s Brickyard (1898-1915).

Many of the early immigrants to the Edmonton area were originally drawn by the lure of northern gold fields, but they found another form of gold that persuaded them to put down roots in Edmonton. Clay seems an unlikely substitute for gold, but these early entrepreneurs recognized that the growing community would need bricks. The river valley clays and nearby coal seams provided the necessary ingredients for a brick manufacturing industry.

The most obvious feature here, related to brick making, is the huge borrow pit from the Pollard Brickyard. The clay from this pit was dug by hand and ramped out of the pit. The clay was then molded into bricks and fired in long linear kilns running perpendicular to the river. Brick from the plant was used to construct several local churches, including Holy Trinity (10037 84 Avenue), Strathcona Baptist (8318 104 Street) and St. Anthony’s (10661 82 Avenue). The Pollards built a two sory brick mansion adjacent to the plant.

Brick fragments are scattered over a wide area on the flats, and exposures in the river bank reveal dumps of brick debris and profiles of the former brick kilns. On the north side of the road running west from the LRT bridge ramp there are several linear brick kiln structures. If you look along the top of the riverbank between the High Level and LRT bridges, you can see cellar depressions and a chimney base. All of the industrial enterprises in this area, and elsewhere in the valley, were heavily damaged and ultimately closed as a result of the devastating flood of 1915. The alluvium from this flood can be seen at the very top of the riverbank profile. 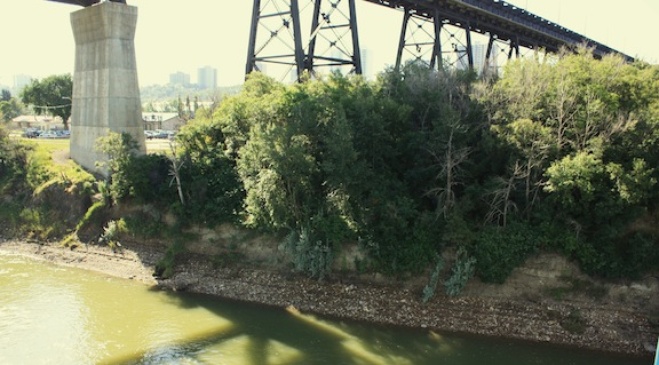