Construction started in 1912 on this Grand Trunk Pacific Railway Hotel, and was complete in 1915 at a cost of $1,250,000 plus $750,000 for furnishings.  July 5, 1915, exactly five years to the day from the arrival of the first G.T.P. train in Edmonton, saw the grand opening of the Macdonald Hotel.  500 guests attended, being banqueted in relays.  “Never before has it been possible to carry out a similar function on so colossal a scale”, the Edmonton Bulletin proudly proclaimed.

The Macdonald Hotel, a prominent Edmonton landmark, replaced the Grandview Hotel and the Travis-Barker building.  In 1950, an extension, known locally as ‘The Box’, was added to the north. 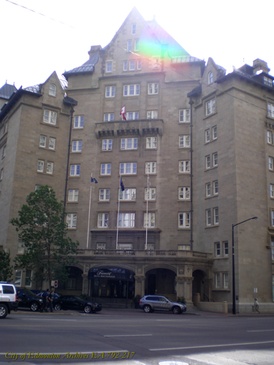 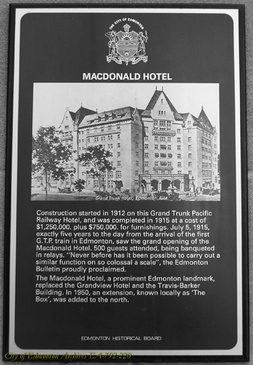