The French say “non pareil” for that which has no equal in art or fame. The English translation of this term, “nonsuch,” tells the story of the building before you.

When John Rowand, chief factor of the Hudson’s Bay Company [HBC], administered Fort Edmonton in the early 1800s, he tried to name the post Sans Pareil. Fortunately for Edmontonians, the name didn’t last long. The company certainly prevailed, and the trading post gave birth to the town which grew up around it. Burgeoning business prompted the HBC to erect this warehouse and stable for its delivery horses in 1914. The brick masonry, sandstone cartouches, and ornamental HBC coat of arms complemented similar historic buildings in the neighbourhood.

In 1924, when horse-drawn delivery wagons gave way to motorized trucks, the HBC leased its stables to various tenants, including the Edmonton Pure Butter Company, an award-winning dairy comprised of former employees of the Edmonton City Dairy. After the Second World War began in 1939, the HBC sold the building to the Department of National Defence for one dollar. The Royal Canadian Navy Volunteer Reserve, Edmonton Half-Company, needed a new home. The military renovated the old stables to accommodate offices and training facilities for more than 3,700 recruits. The navy commissioned this land-locked navel base the HMCS Nonsuch as a tribute to the original owners. The Nonsuch was the name of the first HBC ship to enter the Hudson’s Bay in 1668.

The Half-Company called the base home for more than twenty years, but budget constraints forced the navy to relocate. In 1965, the Loyal Edmonton Regiment, 3 Battalion, moved in and renamed the building the Ortona Armouries, commemorating the battalion’s heavy sacrifice during the Second World War Battle of Ortona.

Twelve years later, the building welcomed new tenants such as the Commonwealth Games Association, the National Film Board, the Ortona Gymnastics Club, and the Edmonton Folk Music Festival.

The only remnant of similar horse stables left in the city, this Edmonton landmark truly has no equal. 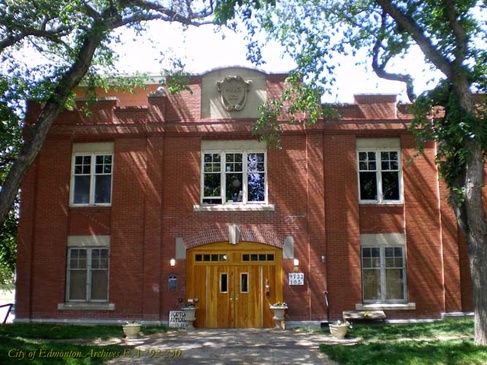