Many Italian immigrants in Edmonton worked in coal mines along the banks of the North Saskatchewan River. From the 1880s to 1970, over 100 companies operated. The Humberstone Mine was among the most important. Established in 1900 to mine the Clover Bar seam on the north side of the river (River Lot 42 East of 34 Street and south of 118 Avenue), the first shaft was south of the Clover Bar Bridge and the workings were near what is today Rundle Park Golf Course. By 1910, the mine employed 200 men. The mining industry had a distinct hierarchy: owners and managers were largely of British or Canadian descent, and workers of southern and eastern European descent. Two members of the Biamonte family worked in the Diamond Coal Mine at Clover Bar (Tony eventually became a shareholder of one of the mines). Domenico Chiarello started work as a miner and eventually operated his own mine for 24 years and opened the Venice Confectionery, at 97 Street and 106A Avenue, in 1948. Other miners included Giuseppe Peccori, who arrived in Edmonton in 1903, Joe Marta, Giovanni Rosso, brothers Giacomo and Giovanni Sartor, Silvio Tona, four Del Bosco brothers and Francesco De Filippo. Besides providing high-grade coal for homes, the company had a spur track connecting to the Grand Trunk Pacific Railroad. A small community developed becoming the Town of Beverly (annexed by Edmonton in 1961). Mining was dangerous with the possibility of cave-ins, gas explosions and flooding ever-present. Not all owners were rigorous in ensuring safety and accidents occurred; for example, at the Humberstone Mine, a new shaft collapsed in 1909 and, in 1915 and 1916, tunnels flooded. Italian miner, Joe Centazzo testified in Edmonton at the Coal Mining Industry Commission in 1919, initiated after the General Strike. Many Italian miners, including Centazzo, were members of the One Big Union, which sought to have miners speak forcefully with one voice. Centazzo noted at the hearings that he had worked in mines all over Alberta, most recently at the Humberstone Mine, and pointed out a range of safety issues. The Humberstone Mine closed in 1928. 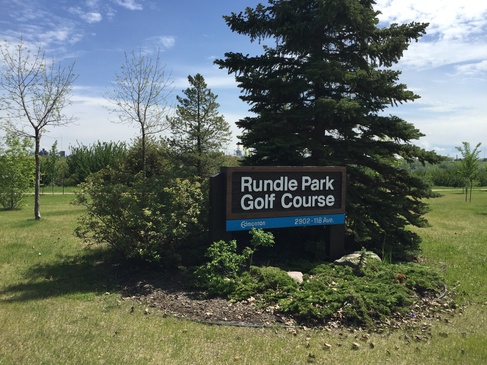 Rundle Park Golf Course on the north bank of the North Saskatchewan, June 2016. Photo by Adriana A. Davies. 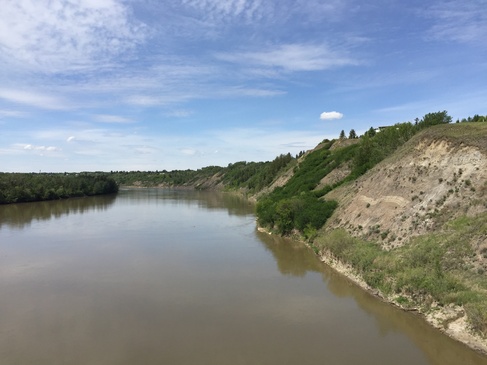 View from the Gold Bar Footbridge in Rundle Park of the north bank of the North Saskatchewan, June 2016. Photo by Adriana A. Davies.