The Hunter Residence was constructed probably by Edmonton contractor Alexander J. MacKay. He purchased the property upon which the house was built in March 1907 from its local real estate agent who had acquired the property in February 1907 from its long-term owner, the Honourable Frank Oliver, Editor of the Bulletin and Minister of the Interior. Oliver had held title to the property since 1890. No documents exist, however, to indicate that he made any effort to develop the property. Mr. Falkenberg, who was a door-to-door produce merchant, moved the house closer to the front of the lot in 1917, thus allowing for a larger garden space at the rear of the property. Mr. Falkenberg and his family had homesteaded land in the Kavanaugh area prior to their relocation to Edmonton in 1908.

Frame houses of generous proportions, simply massed and bearing a minimum of historicizing detail were frequently constructed during Edmonton's prime boom era, 1905 to 1915. Due to material constraints and economic consideration, wood was the most common building material, and the structures ranged dramatically in scale. 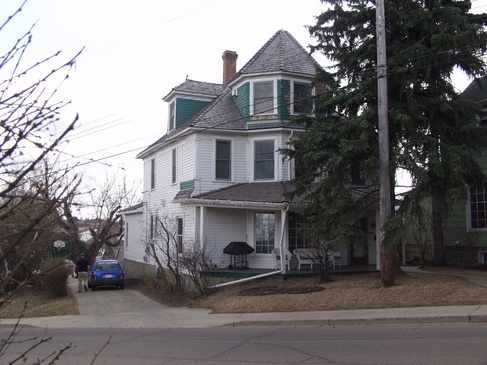