The H.V. Shaw is a four and a half storey masonry warehouse and office building in a mid-block location in the downtown neighbourhood that was the centre of Edmonton’s pre-WWI warehouse area.

The H.V. Shaw Building is valued for demonstrating the importance of manufacturing early in the growth of Edmonton. Built as a cigar factory in 1914, and operating as such until 1919, its period of significance is marked by the importance of cigars to the local economy and culture. Cigar maker H.V. Shaw operated a factory in the building and produced Major Reno and La Palma Cigars, brands that were widely available across the prairie provinces at the time of WWI.

The H.V. Shaw Building has importance as a very early example of a purpose-built industrial building in Edmonton. Constructed of reinforced concrete with brick sheathing, it was only the second fireproof warehouse in Edmonton. It’s architectural details and the painted advertising on the south wall makes it a landmark in the warehouse district. The vertical lines of the façade reflect the Chicago School of architecture. The elaborate brick and stone work patterns make this one of the most decorative of Edmonton’s warehouses.

Magoon and MacDonald, architects, designed the H.V. Shaw building, and their contribution adds substantially to its importance. Magoon and MacDonald was a prominent architectural firm in Edmonton before WWI. Their designs included Old St. Stephen’s College, McDougall Methodist Church, the Tegler Building and the Salvation Army Citadel.

The association with H.V. Shaw, the owner of the building and the factory, adds value to the structure. Shaw, a well-respected local businessman, started his wholesale cigar business in 1901. He was typical of Edmonton’s early entrepreneurs that contributed to the growth of manufacturing and warehousing during the Edwardian era. 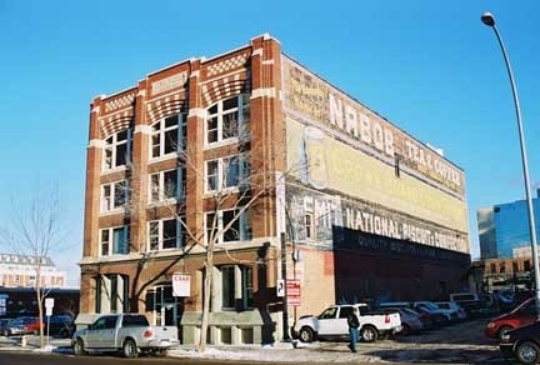