This house is the work of prominent Edmonton architect, George Heath MacDonald, who had already designed several of the city's important public buildings in the neo-classical style. However on this project he experimented with modernism, seeming to incorporate some elements of Art Deco, Moderne, and International Style, as evidenced on this project by the curvedglass block setting of the deeply recessed entrance-way, flatroofs, horizontal lines, and rectilinear geometry. Working for his friend, Lou Hyndman, MacDonald may also have been influenced by the work of Frank Lloyd Wright in such details as the melding of indoors and outdoors, hidden entrances, overhanging shelters, the protruding second floor sundeck, and the use of one geometric theme – in this case, tiered right angles – repeated to give unity to interior and exterior design. Entering from the street into a small entrance hallway, one is immediately drawn to the front door and the light and profusion of the garden, visible through the solid expanse of picture windows.

Born in Edmonton in 1904, Hyndman practiced law in the city after graduating from the University of Alberta. Premier E.C. Manning appointed him Master in Chambers in the Alberta Supreme Court, a position he held for more than twenty-five years. Hyndman chaired the Edmonton Planning Committee, and served on the Edmonton Public School Board. Louis and Muriel’s son Lou Hyndman Jr. became well known as the MLA for Glenora and as provincial treasurer in the Lougheed government. The family owned this home from 1946 to 2002. 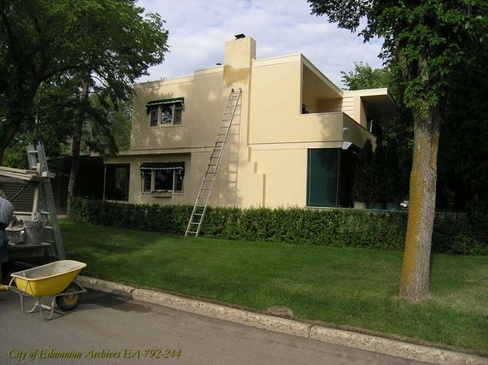 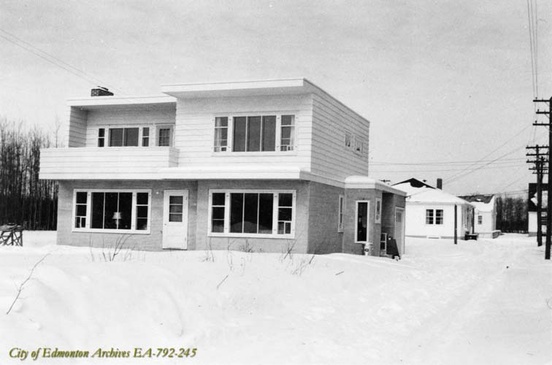 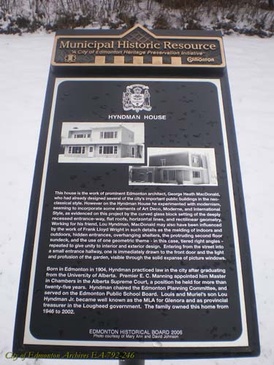