Immigration Hall was built in 1930 as a brick and Tyndall stone two-storey with a full basement institutional structure, identifiable for its classically proportioned symmetrical facade and flat roof. In 1954 a square, two-storey addition was erected on the rear (west) elevation. Like the original building, it has a flat roof and brick exterior with Tyndall stone accents. The structure is situated on two city lots on the corner of 100 Street and 105A Avenue in the neighbourhood of McCauley. The municipal designation encompasses the exterior elevations and the front lobby, but the remainder of the interior and the curtain glass side additions, completed in 2009, are considered non-contributing elements.

Immigration Hall is significant as a federal government building in Edmonton from the inter-war period and as an excellent example of the Classical Revival architectural style.

Designed in 1927 and constructed in 1930, Immigration Hall is valued as a federal government building from Edmonton’s inter-war period. Edmonton’s Immigration Hall possesses design characteristics typical to other urban federal buildings built at the time, including the heavy massing, use of brick and stone, prominent front entrance, central flag pole, symmetrical fenestration, flat roof and cornice. It is one of three surviving post-World War One Immigration Halls in western Canada, and was the last and most elaborate of a series of immigration halls erected across the Prairies over a 50-year period. Immigration halls were built by the federal Department of Public Works to provide free short-term accommodation for agricultural settlers. The prominent location of Immigration Hall northwest of the traditional downtown core and adjacent to the former CNR railway yard illustrates how these facilities were strategically constructed near main railway stations to accommodate the influx of new immigrants. The building’s ambitious size and design reflect Edmonton’s central role within national settlement policy. The building ceased being used as an Immigration Hall in 1951.

Immigration Hall is a good example of the Classical Revival architectural style, and was designed by T.W. Fuller of the Department of Public Works. Traditional architectural styles remained popular during the inter-war period in Edmonton. The traditional ornamentation and formal appearance resulting from Classical Revival style lent an air of sophistication and permanence to the buildings, and added to its popular use in public buildings such as Immigration Hall. Here, classicism has been stripped to its essentials, with strictly ordered symmetry, minimal ornamentation and superior cladding materials providing dignity to an otherwise utilitarian structure. The 1954 addition, located on the west side at the rear of the original structure, was also designed by the office of the Chief Architect's branch of the Federal Department of Public Works. Meant to match the original structure, the 1954 addition used very similar materials and detailing. The Classical Revival style of Immigration Hall contributes to Edmonton’s sense of place and adds to the city’s rich architectural legacy.

The heritage value of Immigration Hall is expressed in such character defining elements as:

Although the building ceased operations as an Immigration Hall in 1951, it maintained a similar function as offices of the Department of Citizenship and Immigration and Citizenship Court until 1969. 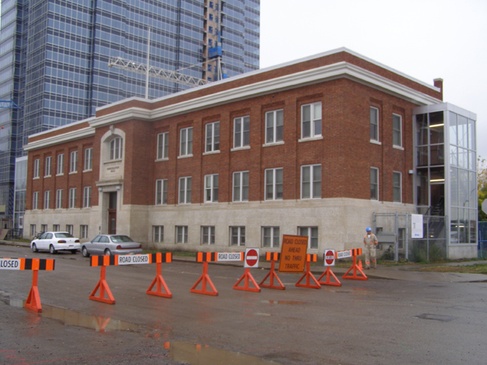