This building housed the former Imperial Bank of Canada, the first bank to open a branch in Edmonton.  Its presence in this location goes back to 1893.  Later it became the Canadian Imperial Bank of Commerce.  Designed by Imperial Bank architect A.J. Everett along with the Edmonton firm of Rule, Wynn and Rule, construction of this building began in 1951 with the basement and ground floor.  Six additional floors were added by 1954.

The building’s architectural style is an excellent and very early example of Modern Classicism.  It consists of steel-frame construction with stone-and-glass exterior curtain walls on the south and west elevations.  The black granite trim is finished with Indiana limestone.  Among the noteworthy design elements are metal spandrels between the windows with the bank’s logo, and the quoins and pilasters stylized as bands of rectangles.  Of special interest are the bas-relief designs indicating the era of rail and air transportation.

The building is illustrative of the theme of banking history in Edmonton since the Imperial Bank of Canada was the first chartered bank in Edmonton and is of primary importance to the city. 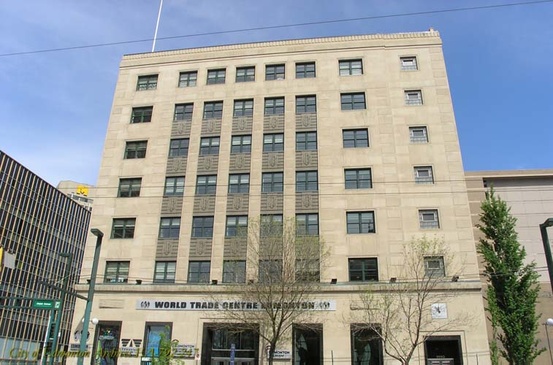 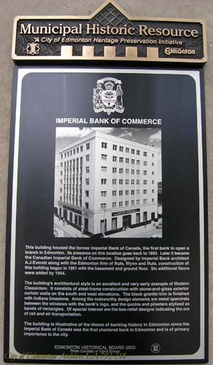