Franco (Frank) Spinelli was born in San Pietro al Tanagro, near Salerno, Campania, Italy, to a farming family; he chose to seek adventure in Canada, in 1951. A workplace accident in the Yukon Territory resulted in a broken back and over a year in traction in an Edmonton hospital. He made a complete recovery and worked as a labourer until 1959 when, with partner Remiro Zalunardo, he bought a small store on the corner of 95Street and 109 Avenue. With the huge increase in Edmonton’s Italian population, Italian goods were very much in demand and the business prospered. In 1964, Spinelli became sole proprietor and built the Italian Centre Shop at 10878 - 95 Street as well as starting a wholesale operation. The Shop became an anchor of Little Italy (others being the Santa Maria Goretti Parish, Saccomanno family grocery and Italian Bakery). Going to Mass on Sunday and then to Little Itay to buy foodstuffs, newspapers and magazines became a tradition. The appeal expanded beyond the Italian community to include all of Edmonton region and a range of ethnicities. Spinelli was also a community builder who supported a range of recreational and cultural activities including helping to found and sponsor the Ital Canadian soccer team in 1960. He provided credit to needy customers as well as cash and in-kind assistance to community organizations including those who ran festivals. He strongly supported the Italian newspaper, Il Congresso, paying advertising costs months in advance. With Lorenzo Bagnariol, Tony Falcone and Alberto Romano from Calgary, he helped to change legislation to enable individuals to make wine for their own consumption and stocked the grapes. Spinelli died of cancer in 2000 and the entrepreunerial tradition he embodied is continued by daughter Teresa, who has expanded shop locations beyond Little Italy (including one in Calgary) and now brings over 20,000 Italian items not only to the Spinelli chain of stores but to other stores throughout Alberta. Spinelli was inducted into the Junior Achievement: Alberta Business Hall of Fame in 2013 and his statue sits in the Park he contemplated throughout his working life. 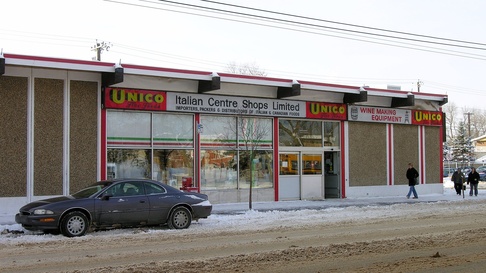 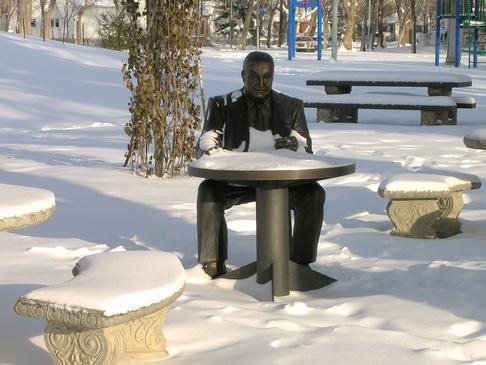 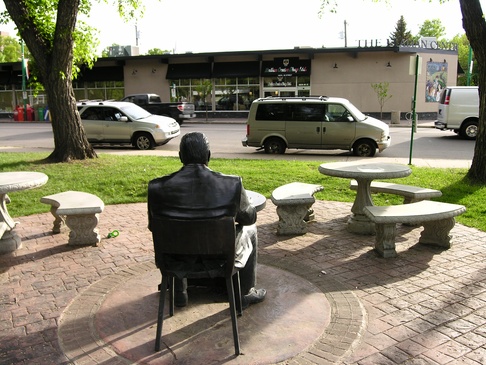 https://www.edmontonmapsheritage.ca/location/italian-centre-shop/ I arrived in Edmonton in July, 1953,18 years old. I had many friends back in Toronto but was unable to start new friendships among young Albertans (they seemed to harbour a grudge against people from the East). Undaunted I soon found that at the local Catholic church, Sacred Heart, it was quite easy to meet all sorts of young people - from Belgium, Italy, Germany.. My first friends were Carmelo, Giovanni Pagliuso, Carlo Romano,Gaetano, Mario Barboni, Edda and Gladis, Giuseppina Scinda, Joe Fiume, Aquilino D’Amico, Giuseppe Petrosilla, Fortunato..and more but I can’t recall all the names. Carlo’s brother Alberto arrived and we became close friends, using French as a medium.We attended a church group, frequented coffee shops, or hung out at a pool hall just below the bridge on 97th St. Often we just walked those chilly streets of Edmonton, exchanging languages. By the spring of 1954 I was able to say I could speak Italian and my friends had acquired some English… There were already a few families of Italian origin in the city, but these new arrivals were the real beginnings of an Italian presence in Alberta. Alberto moved to Calgary where he was instrumental in removing restrictions on wine-making and wine-consumption. One coffee-shop had Italian pop songs on their coin-operated miniature juke boxes.. I listened to Nilla Pizzi, LucianoTajoli, the song Arrottino. Those were exhilaring times..these experiences were life-altering. 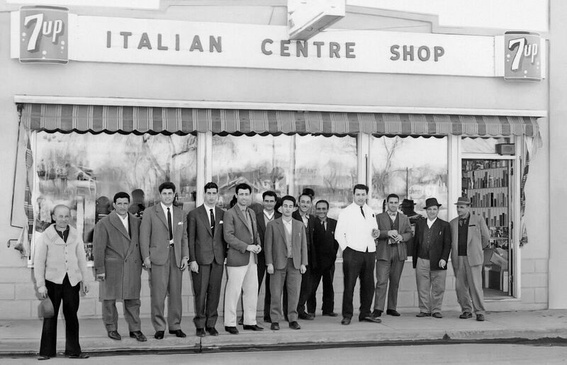 The first Italian Centre Shop, 95 Street and 109 Avenue. Posed in front are men from the Italian community with founder Franco Spinelli in the white jacket, late 1950s. Provided by Teresa Spinelli. 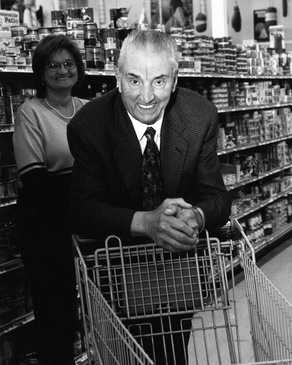 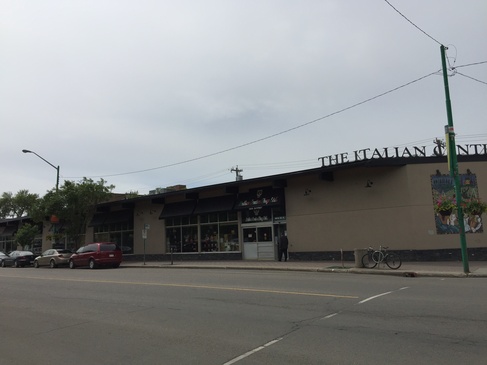 The Italian Centre Shop store across from the Giovanni Caboto Park in Little Italy, June 2016. Photo by Adriana A. Davies. 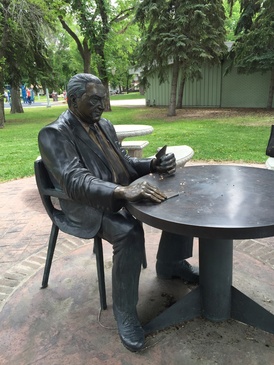 Frank Spinelli statue in Giovanni Caboto Park in Little Italy across from the Italian Centre Shop store, which he founded, June 2016. Photo by Adriana A. Davies.