Designed by: John A. MacDonald Architect

The Jasper House apartments, prominently located on Jasper Avenue west of downtown, exemplify many of the Structural Expressionist tendencies of Mies van der Rohe‘s high rise apartment buildings, such as the Promontory Apartments in Chicago completed in 1949. Like Mies, John A. MacDonald inserts the building skin, composed of brick spandrel panel cladding and aluminum framed windows, between the concrete columns and floor slabs. One major difference between this building and the works of Mies is that in the Jasper House, the concrete shear walls are not internalized on the interior building core but are rather expressed at the exterior corners, leading to asymmetrical facade and plan compositions. This asymmetry is also evident in the penthouse unit and corresponding roof terrace. As with the University of Alberta Student Union Building, Jasper House incorporates a sculpted mural hung from the façade, which is composed of glass on metal framing and adds a visual punch of colour to the muted tones of the rectilinear façade. 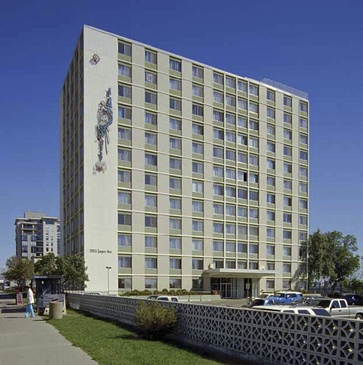