This distinctive apartment block was built between 1907 and 1910 by a local carpenter named John Lang. Lang originally built the structure as a duplex, but in 1938 it was further subdivided into a fourplex.

Lang lived here briefly, but this was really a speculative commercial property reflecting a broader residential pattern in Oliver in the early 1900s. More substantial residences for wealthier owners and renters were built close to the river valley and on the avenues while more modest homes were built along the streets and usually closer to Jasper Avenue. In many cases, developers, such as Lang, built three houses on two 50 by 100 foot lots as a way of keeping their construction costs down and making their homes more affordable.

An intriguing feature of the history of these apartments is their use between 1919 and 1938 as a Nurses’ Residence for the Misericordia Hospital. There was also another house or residence built on the back of the lot, but this was demolished sometime prior to 1938.

The Lang Apartments are a good example of a particular type of residential construction common in the early 1900s and offer a sense of the streetscape and residential patterns of the period. They also retain a number of noteworthy architectural details that add to their value. These include the symmetrical plan of the building, the wide wooden casings with ornamental crowns around the windows and doors, the timber doors with transoms, and double hung sash windows. 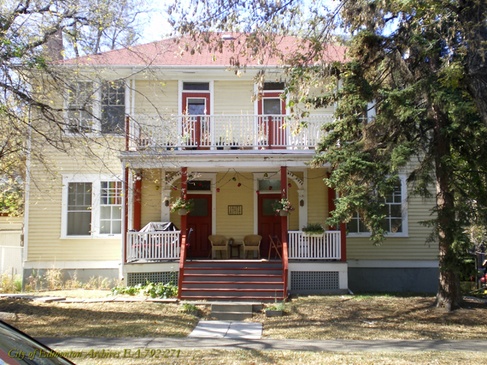 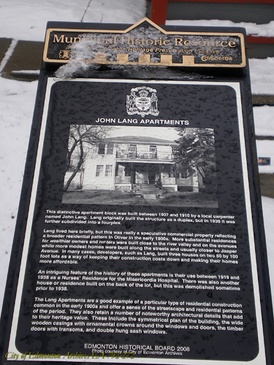