Ever since opening for the Golden Jubilee of Alberta, its 50th anniversary, the Northern Alberta Jubilee Auditorium remains a landmark of distinctive design and sumptuous materials. Its Vermont marble exterior and Italian marble interior elements, accented by extensive French walnut paneling within the auditorium, bespeak a luxurious venue appropriate for the premier artistic stage for the city.

The Northern Alberta Jubilee Auditorium is an excellent example of functionalism (shape of building corresponds to the function) of the Early Modern style of architecture. Its curved front facade provides a sculptural form behind the extended portico. The portico creates a weather-protected walkway and passenger unloading area, and a broad public entrance under a low canopy. The Jubilee Auditorium was originally set in a vast open area. Extensive landscaping was added at the front. 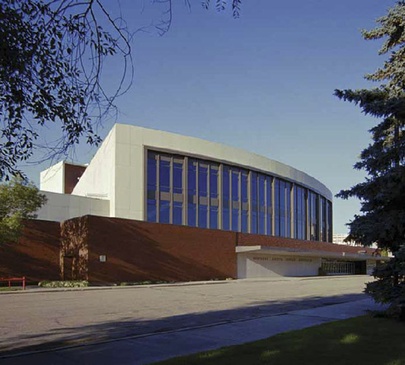