This building was a workshop housing a variety of trade businesses up to 1940. In 1909 Thomas Cairney had a blacksmiths shop in number 38, and later 138, Namayo Avenue (97 Street). In 1910 it was the Fuller & Fane (& then King) Blacksmiths and in 1915 the name changed to Seal & Dowell Blacksmiths and the address changed to 10126 97 Street under the new Edmonton street numbering system. The building became vacant in 1916 for a couple of years. The next occupant was BC Auto Repairs in 1919, but it only stayed a year. R & S Heims Tinsmith assumed it in 1921 and was there for a year, too. Simpsons Tin Shop Drawing took over in 1922 and lasted until 1929. For a year in 1931 it was the Alberta Spring & Fence. From 1932 to 1939 the building changed hands several times but all in relatively similar types of business - auto repair shop, wreckage shop and garage. In 1939 it became the Gine Hing Co., a Chinese grocer store, and in the following year it was renamed the Kwong Hing Co. In 1953 Shew Mah and Kwong Hing Co. were listed together as occupying the same address, which implies Shew Mah was the owner of the grocer store. New World Chop Suey Parlor serving Chinese cuisine was one of the well-remembered popular Chinese restaurants for many of the Chinese (and even non-Chinese) who were living in Edmonton in the 1950s to its demolition in the late 1970s. Speaking of New World Chop Suey would inevitably trigger memories of its late opening hours and one of the few places in Edmonton where one can go for a Chinese meal in the early hours of the morning.

The building was demolished after the City’s decision in 1979 to allow for the construction of Canada Place, a federal government office government that was completed in 1981. 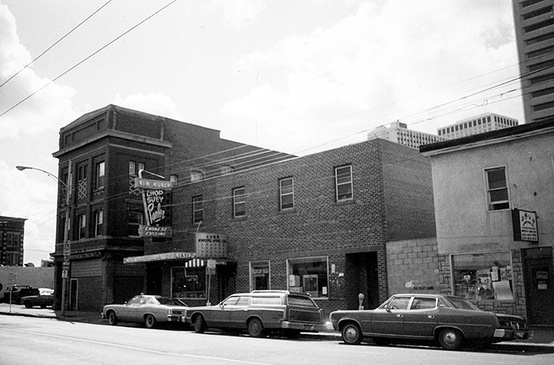