A 43-suite apartment block overlooking the river valley on 100 Avenue and 115 Street, with a high-rise apartment building now connected to the original building, LeMarchand Mansion is on the Canadian Register of Historic Places. René Le Marchand arrived in Edmonton from France in 1905, joining his brother, Oblate missionary Alphonse Le Marchand. Alphonse advised him of the great business potential of the city. It seems he came with money borrowed from investors from his hometown in the Sarthe region, near Le Mans, and some from a union of café waiters in Paris. Le Marchand also had a tale about the origins of his financing; seemingly the sale of the hundreds of expensive straight razors of a rich Parisian for whom he had been the valet, and with which he was able to launch himself in business and then into real estate. It is also said that his investors from rural Sarthe received only one installment on their investment. Be that as it may, Le Marchand was a good businessman and he did very well. He started with a fruit and luxury goods store on Jasper Avenue, partnered in a livery stable, was a representative for a transatlantic shipping company, active in real estate, a member of the Edmonton Chamber of Commerce, and an investor in various enterprises.

Although the former apartment building has been converted to office space, a modern apartment building has given new life to the grand mansion. When it was built, it offered luxurious accommodation with an elevator, dumb waiters, marble flooring, electrical lighting, natural gas heating (from a coal convertor) and even liveried staff. It was expensive. Rent for the two-to-seven room suites varied from $40 to $100 per month, which was very pricey at the time.

René LeMarchand was a great booster of the potential of Edmonton and through his travels in France several of his compatriots came to Canada with his encouragement. He was from the same region of France as Bishop Vital Grandin, Bishop Émile Grouard, and many other members of the Oblate order. 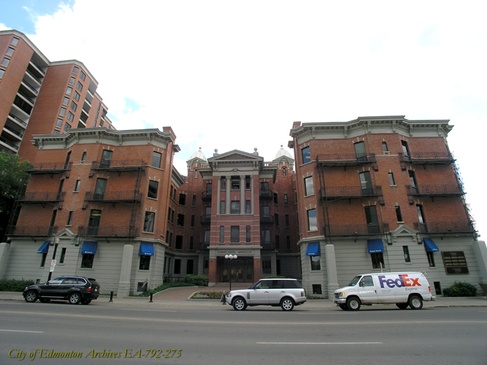 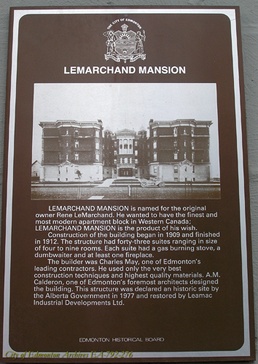