A bronze sculpture by the Franco-Albertan artist Herman Poulin, L’empreinte francophone was commissioned following a challenge in 2004 by MLA Ken Kowalski for Alberta’s French community to provide a monument for the legislature grounds; this was probably brought on by the fact that the Ukrainian community had commissioned a most evocative one on the pioneers from the Ukraine by sculptor Danek Mozdzenski. Generous donors from across the province made the monument a reality and it was unveiled on June 27, 2008.

The piece is almost three meters tall and represents, at the base, the Franco-Albertan flag, which opens like the pages of a book representing the importance of literacy and reading to the French community. Between the pages of the book rises a flame-like flower composed of two halves, one of the lily (fleur de lis) which symbolizes the French, and the other the wild rose, Alberta’s floral symbol. Wishing to represent the future of the French-speaking community of Alberta, Poulin and his wife, Brigitte, travelled around the province and obtained a fingerprint from each of 1166 children in the francophone community and imprinted them upon the clay of some of the surfaces of the monument. The monument can be seen to the east of the large fountain north of the parliament building.

A prolific artist, Poulin was commissioned for another art piece which is just to the north of the wading pool, a 10-foot bronze statue representing the work of the 41 religious communities of women who helped build our province. Among these are many French communities, notably the Grey Nuns, the Daughters of Jesus, the Sister of Providence, the Daughters of Wisdom, the Sisters of Charity of Our Lady of Evron, the Sisters of the Assumption of Mary, to name but a few.  The statue is of a woman dressed in a nun’s habit, holding a large piece of stained glass.

Poulin is also the creator of several large sculptures in rural Alberta, one in Lac La Biche that represents David Thompson, one in Bonnyville of Angus Shaw and another in Elk Point. 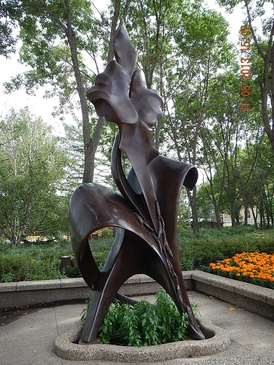