This house was built in 1907 by Lester Allyn, an Edmonton building contractor,.  Allyn also built several other houses in the immediate area to take advantage of the booming market for housing in the new provincial capital.  This house was used by Allyn as his own home until 1911.

The next resident of the house was Frank Ford, a lawyer who later became Chancellor of the University of Alberta and a Justice of the Supreme Court of Alberta.  The house was also home to Arthur Dodman, general manager of the Hudson’s Bay Company in Edmonton from 1915-17.

The main significance of the house, however, lies in its ties to the pre-1912 residential housing boom in Edmonton. As its notable early residents suggest, it is excellent example of the kind of upper middle class housing built at the time.  This is reflected in its location in then fashionable Oliver, the choice of brick as an exterior building material and the size and interior fittings of the house.  By the 1920s and 1930s, this area was less fashionable and this is reflected in the home’s residents who included widows, clerks, a carpenter, a baker and a steamship company agent.  The house also retains much of its original appearance and architectural details including two colours a two storey bay window and decorative “piano” windows over the entrance hall. This may be one of the most intact houses from the pre- First World War period left in Edmonton and serves as an excellent reminder of residential housing patterns and preferences in that period. 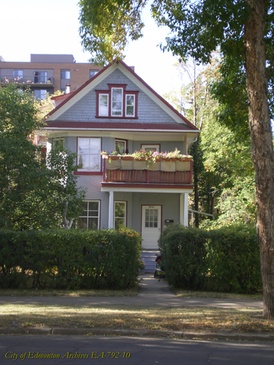 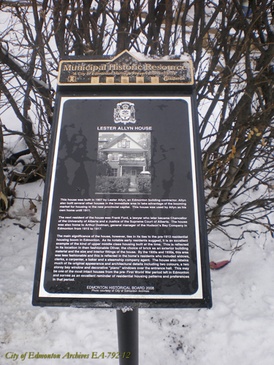