The building was listed in Henderson’s Directory as vacant from 1914-1947. Evidence showed that Hong Tei & Company, Hong Tai Café & Company Merchants, Canton Café, Yat Sun Company were occupying this building area before the Lingnam Chop Suey was in this address. It is plausible that Yat Sun Company and Lingnan Chop Suey were next door to each other. Yat Sun’s address was 10134-97 Street. The Lingnan Chop Suey name and business was later sold to the Quon family who kept the name but the restaurant business itself was moved to another location. Ly Chee Gardens, a restaurant according to its sign “specialized in Chinese foods”, was located on the second floor of the building in the 1960s. The building was demolished after the City’s decision in 1979 to allow for the construction of Canada Place, a federal government office government that was completed in 1981.

Ling Man Chop Suey opened up at this location in 1948. A year later the name was changed to Lingnan Chop Suey. This Lingnan Chop Suey restaurant, located on the west side of 97 Street, was owned by the Pon family. “Lingnan” refers to a region in southern China.

Some history of this Lingnan restaurant can be gleaned from newspaper articles. On August 3rd, 1950 the Edmonton Journal featured an article on one Valeen Pon (Chinese name, Mei Ti Pon), the daughter of Mr. and Mrs. Philip Pon, owners of the Lingnan Chop Suey restaurant. She was in her 20’s and was working for her parents part-time as a cashier in the restaurant and part-time in Edmonton’s welfare department in order to earn money for a European vacation before entering into post-graduate social work (a Masters of Arts degree) at the London School of Economics, University of London in the fall. She wanted to study the Borstal training school for girls (a rehabilitation program which teaches a trade to young female offenders of the law) in Buckinghamshire.

Valeen was a journalism graduate of University of Washington; she graduated in 1948. She was born in Wainwright, Alberta, before her parents moved to Edmonton in 1947. Valeen Pon had been saving over three years for the European trip, which meant forgoing movies and giving up

$1.65 nylons for service weight stockings. She dreamed of being a foreign correspondent but became interested in social welfare work when she was managing editor of the University of Washington campus newspaper. This led her to work in the welfare department in Edmonton. A going away gift from her mother was a pair of ivory chopsticks, a custom of past Chinese mandarins when travelling. Ivory chopsticks were believed to turn black if one is eating with an enemy.

A year later another article (September 8, 1951) in the same newspaper wrote that her parents received word that their daughter had won a ministry of education scholarship valued at $800.

This building was likely built in 1914 because there was no such address in the Henderson’s Directory prior to that year. The building was demolished after the City’s decision in 1979 to allow for the construction of Canada Place, a federal government office government that was completed in 1981.

The space downstairs from Lychee Gardens was Mei Heong Barbecue Co. We specialized in Chinese barbecue, but also sold groceries, and other Chinese goods. The operator was Gordon Fung, my father along with my mom Linda. 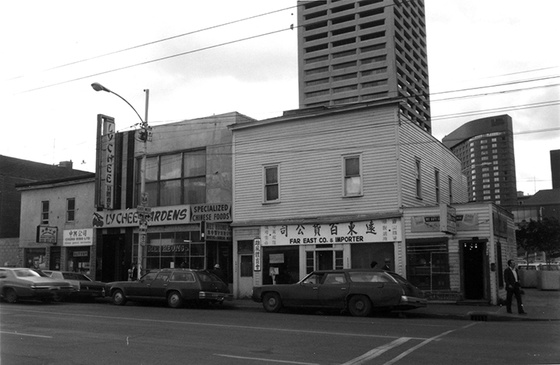 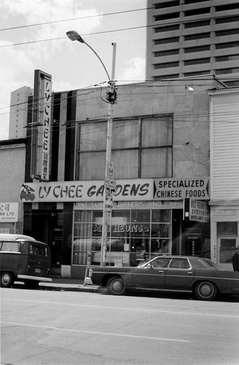