Ask an elderly Indo-Edmontonian where to get the best curry, spice, fish and mithai (Indian sweets) in town and they will direct you to the 300,000 sq. ft. open shopping mall area spread along both sides of 34 Avenue from 92 – 95 Streets for an authentic taste of South Asian cuisine and culture. This is Edmonton’s Little India.

Today if you want a hilsa, a favourite monsoon fish from the Ganges River in South Asia, you can get an email notification from Bangla Bazaar. The shop’s Bangladeshi owner can update you when fresh deliveries of fish arrive from India and Bangladesh. If you want some Indian spices, fresh mangoes or mithai (Indian sweets) you can shop online and receive them at your doorstep through Amrit Bindra’s Spice Centre, one block from Bangla Bazaar.  Colourful saris, tailored salwar kameez, matching bangles and traditional jewellery are all available here. This is Little India - heart of Edmonton’s South Asian community since 1990.

Before the establishment of Little India, it was difficult for South Asians to get a taste of home in Edmonton. Gita Das, vice president of the Indo-Canadian Women’s Association (the first South Asian agency against domestic violence) shares, “There were some Indian groceries here and there in the ‘60s.  Billingsgate in the Strathcona market was the fish lover’s destination. Fish heads and eggs, delicacies back home, were given for free to us sometimes as people here mainly ate fillets. With the arrival of immigrants from Vietnam in 1975 and opening of ethnic produce stores in the downtown area, availability of food for us increased. But Little India has made it easier since 1990s.”

Three main shopping centres, including a grocery store, fabric shop and jewellery shop, existed in different parts of the city in the 1970s. The present-day Little India area had mainly non-Asian fabric stores and eateries, financial shops and Spice Bazaar, a Ugandan ethnic store, which also sold South Asian essentials. However, these were not enough to serve the growing community.

After the Middle East oil crisis in 1973, many South Asian immigrants moved to Alberta in search of work in the province’s energy industry. Around this time the City of Edmonton was also establishing Millwoods - a neighbourhood that could accommodate up to 120,000 people. Affordable housing and availability of land in Millwoods made the area attractive to newly arrived immigrants and they settled there in large numbers. Mosques and Sikh and Hindu temples were also built in Millwoods. Suresh Agarwal, who has helped finance several South Asian businesses in Little India since the 1990s, says, “The owner of the shopping complex in the area, which is now Little India, started to sell plots to individual shop owners. The community was growing fast in Millwoods and demands for produce, groceries and spices were high. This was the perfect place for business.”

The first South Asian spice shop opened in Little India in 1990. The owner, Amrit Bindra, worked as an accountant in the Middle East. He moved to Edmonton in 1989 and decided to stay instead of moving to Toronto. He bought a tiny shop called Discount Spice Centre, relocated it to 34 Avenue and changed its name to Edmonton Spice Centre. The Millwoods Gurdwara, then situated inside a warehouse on 91 Street, advertised Amrit’s shop. Then, daily sales of the shop were around $15, but it is now it is one of the city’s largest spice houses and the main provider of religious commodities for Hindus in Alberta. It also serves the city’s Jamaican population.

Unlike Chinatown, Little India is not a defined distinctive area. In 2006 the local business community approached the City with a proposal to build an arch to mark the area’s unique south Asian identity. The idea met some resistance. The market area also includes Central Asian and Korean shops it was thought that a single ethnic heritage gate might not be appropriate.

Apart from bringing a taste of home, Little India also popularised the use of a politically and geographically relevant identity by ushering a name change of the community from East Indians to South Asians.

Really appreciated reading this. Thank you! 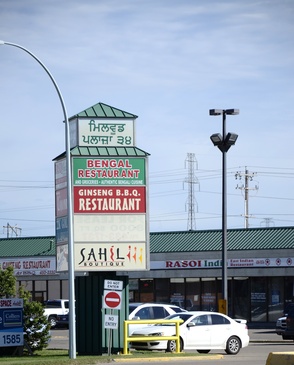